Pick of the Day: James Henderson 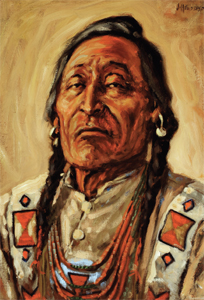 My academic background is in economics and law, so as an arts writer I’m largely self-taught. I didn’t really start going to galleries until after I was done university.

I made my first visit to the MacKenzie in the mid-80s. I’d read about a show there of medieval European artifacts that sounded kind of interesting.

The MacKenzie was on College Ave. then. One Sunday, I think it was in the fall, I walked over and checked the exhibit out. Downstairs there was a second show called Three Pioneers that featured work by three early Saskatchewan artists (all men of British ancestry during the height of colonization in the province) Augustus Kenderdine, Inglis Sheldon-Williams and James Henderson.

All painted, in a somewhat mythological way, scenes of settler life in Saskatchewan. One in particular that I remember shows a family battling to save their homestead from a wind-whipped grass fire.

Henderson’s work stood out a bit because of the many portraits he did of elderly Indian men. That’s one of his paintings above. It’s title is “Gunny Crow, Blackfoot Indian” (1927).

I’m not positive, but I think most of the paintings were portraits of living people. Or at the very least were an attempt to be historically accurate. Looking at Henderson’s work now (in the form of this show at the MacKenzie Gallery which is sub-titled Wicite Owapi Wicasa/the Man Who Paints the Old Men), after 20 years as an art critic, I recognize the problematic nature of Henderson’s portraits.

British colonizer, Aboriginal subject, promotion of a somewhat stereotypical view of aboriginal people as noble savages. The MacKenzie’s quite cognizant of that too. Most of the programming around the show has some aboriginal content, and there’s a second exhibition on display called To Be Reckoned With that features work by five First Nations and Metis artists — Mary-Anne Barkhouse, Ruth Cuthand, David Garneau, Robert Houle and Nadia Myre .

I’m kind of torn on this one. I recognize that representation is a very tricky matter. But I also feel that Henderson’s portraits do not dehumanize their subject and reduce them to an ethnographic curiosity. Far from it, in fact. But still …

The James Henderson retrospective, which was curated by Dan Ring and Neal McLeod for the Mendel Art Gallery in Saskatoon, is on until Sept. 5.  To Be Reckoned With runs until Aug. 21. Nothing’s been firmed up yet, but possibly look for a review of it in our June 17 issue as part of our National Aboriginal Day coverage.

If you’re in the mood for some music tonight, Grassroots Regina is presenting Ontario alt-country artist Brock  Zeman at the Club, 8 p.m. $10.