Pick of the Day: Christmas on Mars 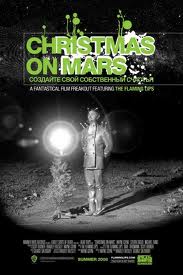 Released in 2008, this cult SF Film was written by Wayne Coyne, the frontman for the U.S. alt-psych band The Flaming Lips. It was shot in and around their home of Oklahoma City, and stars Coyne and fellow band members Michael Ivins, Steven Drozd and Kliph Scurlock along with a number of other actors.

The band also did the soundtrack for the film, which Coyne described in a Rolling Stone interview as being set “sometime in the future, Mars has been sort of conquered and there’s a space station on it but the space program has gone into decline and these people are kind of stuck up there. They’re in the process of converting the spaceships that took them there into a place to live in and that process doesn’t go too smoothly. The whole thing ends up very dilapidated, very un-futuristic, un-2001. There’s an element of confidence among the scientists, but the overall view is that things seem kind of doomed.”

It screens tonight at the RPL Theatre at 7 p.m.  Here’s the trailer.

And if you’re in the mood for a doublebill, Uncle Boonmee Can Recall His Past Lives plays tonight at 9 p.m. Directed by Apichatpong Weerasethakul, Uncle Boonmee captured top honours at Cannes this year with jury head Tim Burton describing the film as a “beautiful strange dream’ about an elderly Thai man who receives deathbed visits from his long-dead wife and long-estranged son. Here’s the trailer.