Pick of the Day: A Separation 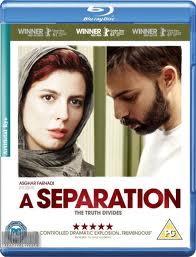 A solid double-bill at the RPL Theatre this weekend.

First up is A Separation by Iranian director Asghar Farhadi. It won Best Foreign Language Film at the recent Academy Awards, and as Jorge explains in his 4.5 dog review in our March 8 issue the film does a fine job of probing beneath all the bellicose rhetoric of Middle Eastern politics to show the humanity of ordinary Iranians struggling to look after themselves and their families.

A Separation screens tonight and Saturday at 9 p.m. and Friday and Sunday at 7 p.m. Here’s the trailer.

Also screening this weekend is Carnage. Directed by Roman Polanski, and starring Jodi Foster, Kate Winslet, John C. Reilly and Christoph Waltz, it‘s been described as a comedy of no manners. It’s about two Brooklyn couples who come together to talk all civilized like about a playground scrap between their pre-teen sons. But soon they are at war not only with each other, but with their respective spouses.

Carnage screens tonight and Saturday night at the RPL Theatre at 7 p.m., and Friday and Sunday at 9:15 p.m. Here’s the trailer.

Today is also International Women’s Day. If you happen to be at the university this afternoon there’s an information session on women’s reproductive health, both from a local and global perspective, that includes a presentation by Planned Parenthood and a screening of the 2011 documentary No Woman, No Cry by Christy Turlington Burns (trailer here). This free event will be held at Rm 215 of the Language Institute from 1-4 p.m.

Also, there’s a celebration of women and art, poetry and music happening at Artesian on 13th tonight at 7:30 p.m. Suggested donation at the door is $50, with proceeds going to Provincial Association of Transition Houses & Services Saskatchewan. For more information call 550-7023.