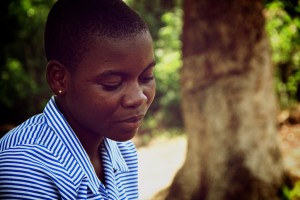 Vida sits in a scratched wooden chair beneath the only coconut tree in a clearing. She has a series of line scars next to her eyes and mouth, three sets of four, twelve marks in all. “I got them from my mother,” she says. “When I was a baby I was sick she gave me them to keep me healthy.”

The fifteen year-old is outgoing, pretty and popular amongst her classmates at the Baptist School Complex and Orphanage (BASCO). “I was only a small girl when I came here. I don’t remember who brought me,” she says. But her eyes convey a knowing sadness as she speaks of the past. She made the trip here a decade ago, up a rugged and isolated path cut through dense jungle brush. Many children have walked the same path since.

Pastor Victor is BASCO’s director. He is tall, dressed all in white with gold trim and refers to the students as his children. He says he remembers Vida’s first day, “we didn’t even have buildings yet. Taught the classes standing under the shade of cocoa trees.” He says Vida had to overcome several challenges. “When she got here she would never talk. For two years she would never say anything. Just a sobbing little girl. She would eat sometimes but she didn’t trust anyone yet. It was so serious you could see she had been traumatized,” says the pastor.

“I wasn’t scared just sad sometimes when I would think of my mother,” says Vida. She shrinks in her chair, stares at the ground and drags lines in the sand with her feet. It is clear she is uncomfortable with the topic.

“Her father died in an accident and her mother was murdered in front of her not long after. Her family thought she was a bad omen. Strange where people find Satan,” says Pastor Victor.

The sobbing little girl is now a young woman and well adjusted survivor. Her development is paralleled by the institution’s. She is one of many success stories in a facility that now feeds and houses eighty-six children and educates more than two- hundred. The schools budget is stretched thin but the staff has developed ingenious methods of assuring students are well taken care of. The compound has evolved to include classrooms,dormitories, washroom facilities, a kitchen, health centre, computer lab and their most recent project, a snail and pig farm.

“The farm will help make us sustainable and self-sufficient,” says Pastor Victor, while examining the wooden boxes filled with snails. “We want to use the money to help our older children continue their education,” says Victor. “We plan on offering vocational training here soon, but these kids have the potential to be anything they want. All they need is funding.” Currently, BASCO is dependent on the donations of benevolent individuals and agencies. The school teaches students between the ages of four and fifteen. Vida is studying for the last round of the final exams the school has capacity for. She wants to be a medical doctor and dreams of a future unimaginable when she took her first steps under the shade of BASCO’s cocoa trees.