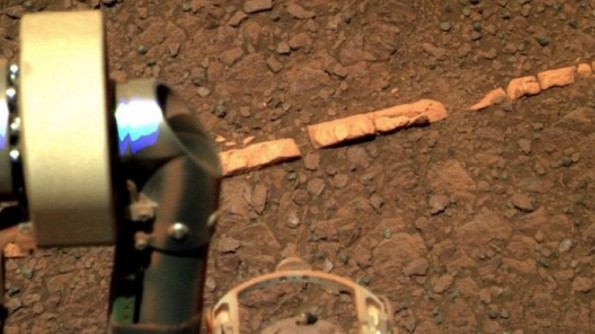 This is cool. NASA’s Mars Rover, which is not (but should be) named Lulubelle,* photographed these rectangular rocks on the surface of John Carter’s kingdom. Scientists are very excited by the find, and are no doubt hopping up and down in their chairs right now.

The rock formations are apparently phyllosilicates, a class of minerals that forms in the presence of a watery environment. It’s yet another piece of evidence suggesting that conditions on Mars may have once been conducive to the formation of life.

I don’t want to go out on a limb and speculate that NASA has finally found definitive proof that an advanced race of aliens once lived on Mars and ruled the planet with a benevolent hand for thousands of years until an ancient evil from the blackness of space destroyed their civilization and launched their children on a desperate voyage of resettlement, but let me ask you this: don’t you think that we’re definitely the descendants of Mars? Like, absolutely for sure? And really, shouldn’t we be building a giant space gun to defend ourselves from that ancient evil when it once more stretches out its annihilating tendrils? I mean, duh.

*The Rover’s name is Opportunity, which is a terrible name for anything other than a spaceship.