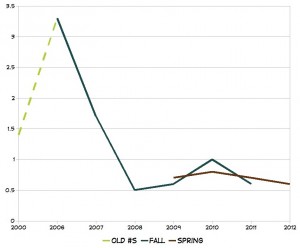 I find it odd that over the last couple days both the L-P and CBC have been reporting our vacancy rate — 0.6 per cent, the lowest in the country — as though it’s a big revelation. The Canada Mortgage and Housing Corporation numbers they’re referring to come from the recently-released spring provincial highlight report.

But everybody seems to have forgotten that CMHC’s 2011 fall survey for Regina — released back in December — showed exactly the same thing: that our vacancy rate is 0.6 per cent, the lowest in the nation.

And I seem to recall that fall report being covered back in the winter as though it was big news. Did everybody get drunk and forget?

But what is really aggravating is this bit from the L-P’s coverage:

The CMHC’s figures do not reflect private investors who have purchased condos and are renting out those units, said [Stu Niebergall, executive director of the Regina & Region Home Builders’ Association], adding, “the actual vacancy rate would be somewhat higher than is reported by CMHC.”

That stuff about the vacancy rate not including the secondary/condo market is true — but only if you look at the spring report in a vacuum. Because the CMHC’s fall report does look at the secondary market. And what those numbers show is that the vacancy rate for condos is 0.6 per cent.* Exactly the same as the primary market. And as much as Niebergall and Draude might like it to be otherwise, you can’t add percentages.

The chart I’ve provided with this post, by the way, tracks Regina’s vacancy rates from 2000 to now. The blue line tracks the fall reports for Regina. Those have been extended reports that include the secondary market since I think about 2010, maybe earlier (I can’t remember exactly when the extended reports started and don’t have time to double check right now). The short brown line shows the spring summary reports which don’t include the secondary market and are, thus, less reliable. And the dotted line covers the period from 2000-2006 — which I don’t have reports for, I just have the 2000 number and thought I’d throw it in.

And in case you prefer numbers to infographics, here are the vacancy rates themselves for the years I have reports for:

The big thing to take away from all this is Regina has had the lowest or near-lowest vacancy rate in the country since the fall of 2008. That’s nearly four years now. And that’s a long time. Longer than the current council’s term.

Also of note, Saskatoon, which is facing very similar growth pressures, currently has a vacancy rate of 3.1 per cent. That’s greater than the 3.0 per cent vacancy rate that the CMHC says you need to have a healthy rental market.

Gee, I wonder if Saskatoon’s city council has been pursuing the same hands-off, trust-the-market approach to housing that we have? Somehow, I think not.