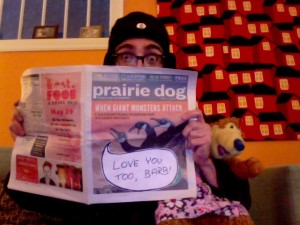 The new Prairie Dog is out today! Alas, it doesn’t contain anything by Paul Dechene. Fortunately, Paul sent in this photo to go with this post. So that makes up for another Decheneless issue, right? Right! Because now, if you find yourself missing Paul, you can just stare at the picture and feel better.

One more thing before I get into what’s in this issue: I have to apologize for a factual error on the contents page. We identified the kaiju on our cover as “Goosezilla”. Obviously, that drawing by Dakota McFadzean is NOT Goosezilla. There’s no such thing as Goosezilla. A three-headed, city-destroying goose monster is obviously going to be called called King Goosedorah.

I should’ve caught the mistake, and I’m really sorry I missed it.

Onward! So! What’s in this issue?

WHEN KAIJU ATTACK Feisty young go-getter Bryn Hadubiak asked the question Prairie Dog’s veteran writers have always been too timid to ask: is Saskatchewan prepared for an inevitable attack by giant monsters — or Kaiju, as expert monsterologists call ’em? Huh? Is it? Find out what Bryn found out from Saskatoon and Regina’s extremely-tolerant-of-stupid-questions emergency managers, here.

CHANGING OF THE GUARD When Greg “Gregory” Beatty heard that a whole bunch of Saskatchewan Party MLAs wouldn’t be running in the next provincial election, he knew he’d have to find out what that meant. Learn what he learned, right here.

DOES THE SUN REVOLVE AROUND THE EARTH LIKE SOME STUPID DOCUMENTARY BY A HOLOCAUST DENIER SAYS? No. But how do we know? AshleIgh Mattern takes us through the science.

DID CHRIS MORIN INTERVIEW RAP DUO ATMOSPHERE THIS ISSUE? Yes he did.

It’s all in the new Prairie Dog, available at 400 locations city-wide. Hooray!