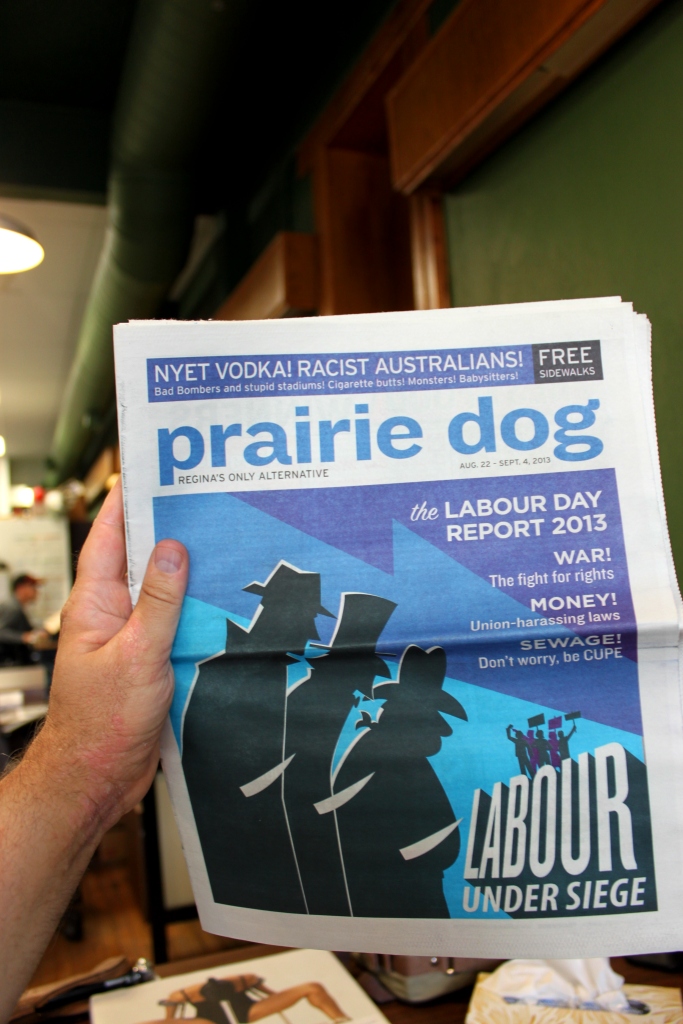 Hey! I forgot to tell all you lovely readerlings that there’s a new issue out. Well, you probably figured it out already. But if not you should definitely make sure to pick the new Prairie Dog up–there’s SO much good stuff in it! Let’s take a virtual tour…

THE LABOUR DAY REPORT Most of the feature is about the scourge of union-bashing. Yup, thanks to years of well-funded anti-union propaganda, organized labour is often seen as public enemy number one. What’s up with that? Paul Dechene and Lisa Johnson get into it. There’s also an update on Saskatchewan’s anti-labour legislation by the esteemed Greg “Gregory” Beatty.

NO END IN SIGHT Foreign students Victoria Ordu and Favour Amadi worked a few shifts at Walmart in unintentional violation of their visas and as a result they were ordered deported by a hang-’em high immigration officer. Phooey to that. Unfortunately, the two have been in sanctuary for more than 400 days. Vanda Schmockel updates their sitch.

RACIST IMMIGRANTS Gwynne Dyer makes fun of Australia, and it is hilarious.

HERE THERE BE DRAGONS Prairie Dog finally gets around to writing something about that wicked-cool show at the Science Centre. Take it away, Beatty!

NEW STADIUMS WON’T SAVE THEM The Blue Bombers just got a new facility, but oh nooo! They still suck! Rosie ponders what this means for the Riders.

THE END OF THE WORLD, AND HE FEELS FINE Jorge Castillo reviews the new movie from the Shaun Of The Dead and Hot Fuzz team.