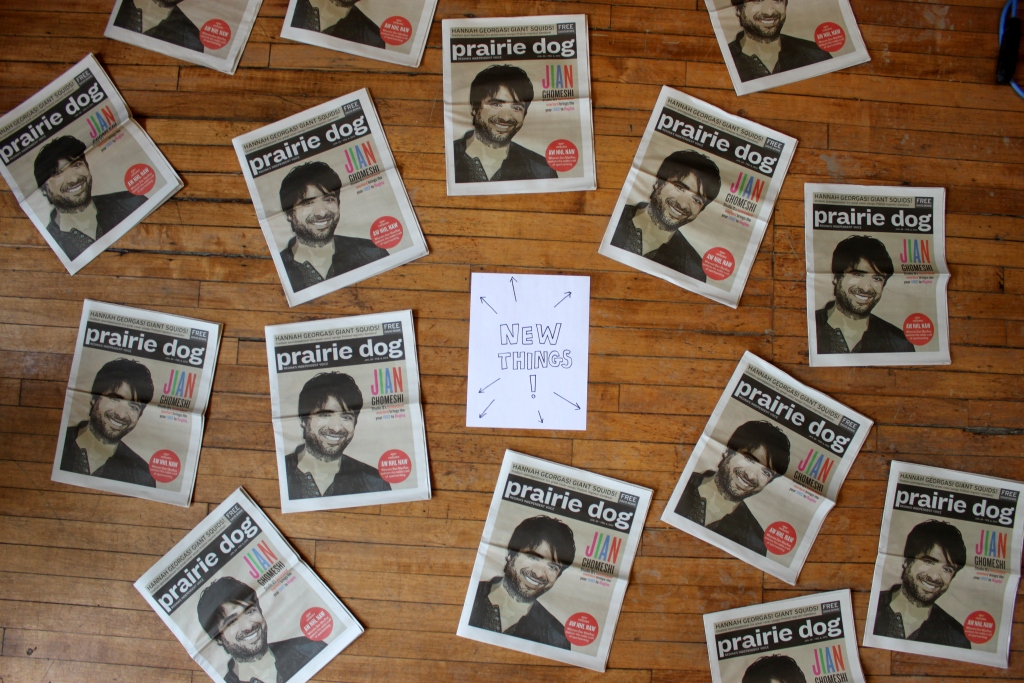 And is it EVER new! This issue, Prairie Dog has a new printer–helloooo, Estevan Web Printing! What else? Well, we switched to a smaller format (even MORE portable!) and tweaked the design (four columns instead of five, new ad sizes, couple other nifty changes here and there).

As for the printing itself? It’s just fucking gorgeous — the best, without question, Prairie Dog has ever had.

But there’s more to our paper than a new look. So very much more. There’s this little thing we like to call “content”. And there’s some good content in this one. Here’s a rundown:

JIAN GHOMESHI!!! The mellifluously voiced host of CBC’s excellent morning show Q is coming to Regina next week to read from his new book 1982. It will be an excellent evening. Vanda Schmockel has the excellent interview.

SHINY EXPENSIVE THINGS!!! Well, it looks like Regina’s steaming ahead on an expensive new stadium. That damn cantankerous Dechene looked at the numbers and he doesn’t like it, no sir. But Mayor Fougere is undeterred: Regina deserves a stadium, by gum, and it’s gonna get one. Read about it here.

AW NHL NAW!!! Dan MacRae’s surprise Dog Blog column becomes an even surprisier column in the actual paper! On the cover I wrote that Dan “molests the noble craft of sportswriting”. I stand by my description.

DIGESTING A WHOLE YEAR!!! Prairie Dog’s King Of Dining has a pile of reflections on the food he ate and the things he wrote last year. Sample: “In a year teeming with godawful ideas, I made my contribution to the dumbosphere by eating at five food courts in one day. I could have spaced it out over the course of a year if I’d wanted, but deadlines and determination will launch a person into an odyssey of lonely indigestion.” Ha ha haaa! Aidan! So funny!

WHAT ELSE? Well, there’s more news, and CD reviews, and a bunch of Top 6 columns, and Typo Wiener and Queen City Confidential, and NO LETTERS TO THE EDITOR (because you guys were slackers!), and a pretty, um, penisey comic by Dakota (with bonus Puty!) and more! It’s a good issue! And it’s the only thing like it in Saskatchewan so you should pick up a copy.