Maybe you know John Callahan’s work from his single panel cartoons. Or maybe you remember the animated television series Quads, based on his cartoons (still on Teletoon last time I checked).

One thing is certain, if you’ve seen Callahan’s cartoons, you would remember them. He seemed to make a point of making viewers as uncomfortable as possible. Maybe it’s hard to see how plain wrong his  jokes were in a time when Family Guy‘s wheelchair-bound Joe Swanson routinely gets his unfeeling legs maimed every week … but Callahan went much farther long before Peter Griffin said “holy crip he’s a crapple.”

Callahan became a quadriplegic in a car crash at the age of 21. He drew with a visceral simplicity by holding a pen between both hands. His bizarre, incredibly offensive work outraged everyone at some point. He was an alcoholic who started drinking at age 14. He gave up the sauce at 27. Robin Williams was going to play him in a biopic. His 2006 album featured a guest appearance by Tom Waits. His hate mail is proudly displayed on his website.

So long, John Callahan. Thanks for saying things no one else would, and thanks for all the shameful, uncomfortable laughs. 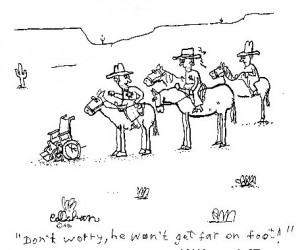