I heard rumours that somebody’s already advertising for Wascana Village, the suburb that the RM of Sherwood hopes to sprout on Regina’s border like a carbuncle. And here’s that ad. Looks to be about a quarter page, full-colour job that ran in last Friday’s Leader Post. I don’t know if this was paid for by the RM or the developer, Great Prairie Ltd, but here’s the copy:

Stunning homes designed and built to high architectural and building standards, with choices for everyone from families to seniors to those just starting out. Lakes and parks. Schools. Bike paths weaving through the village. And a toboggan hill for winter fun. All of this with groceries, shops and services close at hand.

Find out more about our vision for vibrant living in a self-sustaining community in the RM of Sherwood.

I love how the toboggan hill — which I’m assuming will be formed from the dirt dug up for the man-made lake — is the big selling feature. “You will get to trudge up a hill in the snow because we can’t think of anything else you’ll want to do here in winter,” the ad seems to be saying.

Other keywords that leap out at me are “live/work community” and “self-sustaining.” I guess they’re trying to sell the idea that even though this proposed town of 14,000 will be built right on the edge of Regina, no one who lives there will ever actually go into Regina. And yet they’re running this in Regina’s newspaper of record. Maybe they’re trying to say, “Don’t fret, Regina. Rosy cheeked Wascana Villagers, fresh from their toboggan hill, will not be clogging up your hot chocolate shacks.”

Good. Because there’s nothing smugger than a tobogganning suburbanite on the Prairie.

But I note there’s a keyword missing from the Wascana Village ad: “Happening.” As in, “this development is actually happening because the province has approved our plan.” Which, last I checked, the province hasn’t.

Another missing keyword would be, “opposed.” As in, “the city of Regina, your nextdoor neighbour, is opposed to this development and presumably that’s going to make getting provincial approval difficult.”

And I’m also disappointed to note that the ad doesn’t include any quotes from the press coverage this exciting new suburban development has been getting. They could have included lines like these from our last issue:

“…this is the furthest thing from a walkable neighbourhood plan…”

“…a hallmark of auto-dependent sprawl, and the opposite of what [one] finds in traditional walkable neighbourhoods…”

Those are quotes from Jeff Speck, co-author of Suburban Nation, who’s had a look at the plans for Wascana Village that Great Prairie has posted online. Granted there’s nothing publicly available that’s really detailed about the village but Speck says that just by looking at the street layout he can tell it won’t provide the basis for a sustainable, walkable community.

And I can’t say I’m surprised. Speck argues that designing a really successful community takes a lot of expertise and based on what little you can find about Great Prairie online, they don’t seem to have much of a track record with building new communities. Or anything, for that matter.

The designer Great Prairie’s hired to lay out Wascana Village, Weston Consulting, does have a few neighbourhood plans under their belt. I’m no expert on these matters but, with the exception of the plan Weston did for Georgian Bay, the rest of its projects seem plagued by the cul-de-sacs, crescents and feeder roads that contribute to the car focus of most suburban developments.

Anyway, a few issues ago I ran part of an interview I did with Jeff Speck from before he’d had a look at the Wascana Village street layout. I thought I’d post the complete conversation below. It’s a pretty good primer on what to watch out for when new developments are proposed. 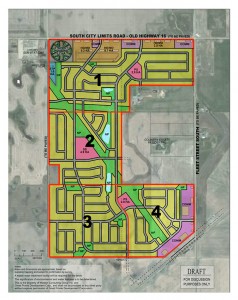 JEFF SPECK: Is the city troubled by it because it’s a real economic challenge or is it troubled by the philosophical planning question that this constitutes a form of sprawl and therefore is not the healthiest regional form of growth? If they have their own water and their own services and everything else then the burdens on the city could be as little as zero. With one exception which I’ll describe to you. Are they really going to provide all of their own services. Are they going to provide their own fire and their own police?

So I think the first conversation to have is one of sheer economics not burdened by philosophy and to project what are the costs going to be to the city in terms of the many services that you maybe haven’t thought about that [you’re] going to be providing? And how can the city be compensated for those costs?

The experience in most of America is that when new suburbs are built, the developer fees and then the taxes from the residents might create a short term financial gain but in the long term the costs of eventually repairing and potentially replacing the infrastructure outweigh the cash coming in prior to that. There’s been a lot of conversation in the U.S. about how these suburban developments look good for about 20 years but then when the roads need repair we learn that they weren’t a good investment.

Secondarily, independent of whatever those costs are going to be to the city, there is the fact that there is going to be a lot more driving on the roads to get to from there. And that is its own cost. And in the U.S. typically, cities will exact improvement fees from developers who create projects that are going to further tax their roads.

There’s a third cost — and by the way, that does not mean that those funds should be used to widen the roads, because there’s a third cost, as more and more drivers put pressure on those roads, there will be tendencies to widen them which will make them
more noxious to their surrounding neighbourhoods. It isn’t so much the number of cars that make roads unpleasant it’s the speed of the cars. And when you widen the roads, cars go faster. And of course, walking next to a two-laner is very different from walking next to a four-laner.

[RECORDING DEVICE KACKS OUT HERE FOR A FEW SECONDS]

In the U.S. they would tend to collect that roadside detritus known as drive-through business. That’s an issue.

[Fortunately, Wascana Village] is being built at a time when the continental trends are towards re-urbanization and not suburbanization. As I say in my book, the two largest demographic bubbles that are dominating the purchase of property are empty nesters and young adults, aka millenials, neither of whom prefer the suburb to the city.

I would be dishonest with you if I did not explain that I spent most of my career designing just the sort of project as you describe and arguing for it as an alternative to sprawl. In the context of a suburbanizing city where what is being built currently are pods of single use housing, subdivisions, office parks, shopping malls, in that context it makes total sense to suggest and to build an alternative model based on the traditional neighbourhoods of this continent. I’ve worked on probably 30 new town plans over the last 15 years and they were all mixed use, walkable, suburban, somewhat complete communities. But they made sense because they were surrounded by the bad version of new development which was pods of single use connected only by automotive infrastructure.

So, I guess there’s two questions to ask philosophically regarding this new community. The first is, are you building new sprawl? And if you’re building no sprawl, then there’s less justification for a positive model of suburban expansion. And then the second related question is, is there ample opportunity for a similar project closer in? Does the city need to grow in this way? And can a person who wants to buy a free-standing single-family home find one at a reasonable cost within the city limits, and ideally towards the centre of town?

And then the final question to ask, which is a 100-point question, and there’s a checklist in the back of Suburban Nation, are they really building it in a way that will create a walkable, mixed use community? And there are 100 details — probably 500 details if you count everything — from the size of the lots, to the width of the streets, to the setbacks of the homes, to the density of the dwellings, to how different densities are organized with respect to each other, to the location of parking, to the provision of transit, that all will cause it to be a principally walkable or principally automotive community.

This is how America grew. The actual location of the city limits is only an issue from an economic perspective. In terms of proper city form, where that line is drawn is irrelevant.

No one regrets the garden suburbs that were built all around this continent in the teens and twenties. No one regrets Cabbage Town in Toronto which was an expansion of Toronto. The New Urbanism with respect to the construction of new communities is about looking at those places in American cities that have the highest real estate values and where people most want to move in and where houses almost never come up for sale. These were a success and if we’re going to expand our cities let’s expand them just like this.

But I’ve learned that the typical skill of a contemporary land planner is so low that it’s hard for these to turn out well unless they’re done by a maestro.