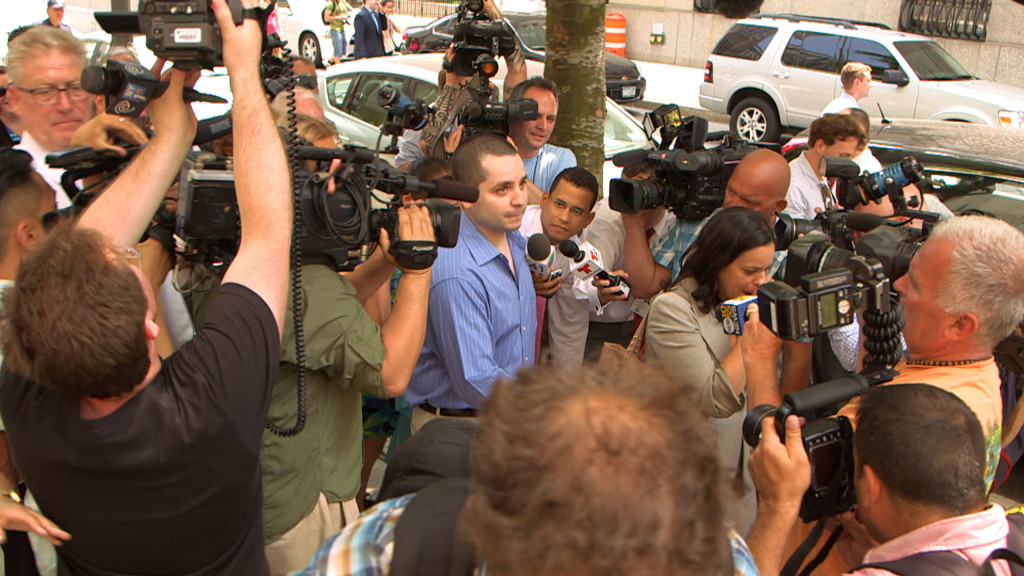 The emergence of two major players in the documentary field –Netflix and CNN- plus the continuous strength of HBO is doing wonders for the genre. If there was a time a couple of outliers were the only ones to leave a mark in the box office, now documentaries are easily accessible and are more poignant than feature dramas by a mile. Yesterday, the CNN-acquired The Wolfpack had the crowd going. Today, the HBO-backed Thought Crimes drew a significant audience.

Thought Crimes (USA, 2015): It could have been a curio: NY cop Gilberto Valle was convicted in 2013 of conspiracy to commit a crime (kidnap and eat women). He used the police database to track down female acquaintances and discussed online what he would do to them in graphic detail. Here is the kicker: Valle never acted on it. In fact, his defense claimed he was voicing a fantasy in an appropriate environment (namely, a fetish website).

Director Erin Lee Carr taps on an interesting subject: As hard to stomach as Valle’s sexual fantasies are (and it gets pretty rough), he may have been penalized for a thought crime. The line is very grey as intention is a critical factor. Instead of staying with the abstract discussion about the limits of freedom of expression, Carr goes back to Valle time and time again. Her decision is unimpeachable cinematically (the former cop is hard to read and disturbingly watchable), but the matter of thought policing could have used additional scrutiny. Also, some of the recreations (like Valle sitting in front of a computer screen) have a film school feel to them.

Regardless, Carr knows how to tell a story. Shouldn’t be a surprise: Erin is the daughter of the great, much missed David Carr. Three prairie dogs.

The Arms Drop (Denmark, 2014): In 1995, a Danish citizen, Niels Holck, planned to drop dozens of AK-47 in West Bengal. The idea was to arm local rebels against the repressive and vicious provincial government. In order to achieve this, Holck hired a British arms dealer, Peter Bleach, who in turn kept the English government and the MI-5 posted.

The plan went sour. Holck managed to escape, but his exploits didn’t go unnoticed and India demanded his extradition. Bleach landed in jail and the British intelligence denied knowing of him.

Oddly, this is just the setup of The Arms Drop, a fascinating spy story in which two guys who thought they were players realize they were just pawns. The film gets an extra oomph from the compelling Holck and Bleach. The British in particular, stiff-upper-lip, prim and proper comes across as more sympathetic. Twenty years later, Bleach seems still surprised he was betrayed by his government, and nurses the illusion of revenge against the agent that almost got him hanged.

The problem with The Arms Drop is that not even the audience has any clue what was the goal of the forces at play, outside Holck’s. There are no theories or insights, just two men fumbling in the dark, trying to remain afloat. Three prairie dogs.