Here’s Your 3.9 Per Cent Tax Increase 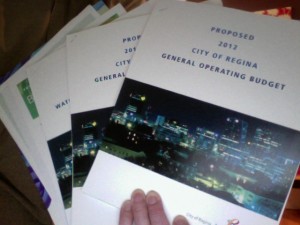 Look at what I get to read tonight. It’s the city’s proposed 2012 budgets, oh joy.

So much for watching movies.

Anyway, I’m kind of juggling kids right now so I can’t get into too much detail (it doesn’t get debated by council until Dec 12 so there’ll be plenty of time to go over it) but the big news to come out of it is that there will be a slight mill rate increase this year.

For the average household, that works out to about $54 more a year in property taxes.

I know several people will say this is too much but figure it could be worse. Word on the street is Calgary is contemplating a 4.5 per cent boost while Edmonton is looking at five.

And, if you’re thinking, “Man, is budget season coming earlier every year?” You’re right. It is. When I started covering city budgets three years ago, they were going through council in April. Last year, they moved that back to January. And now they’re running the budget by council in December.

But, according to Brent Sjoberg, general manager of corporate services, they’ll be getting the budget done around this time of year from now on.