Here’s Half Of Your New Safeway, Cathedral 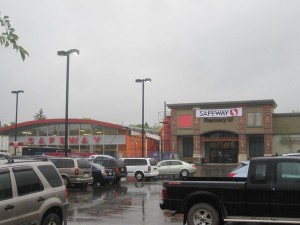 The swooping arch of Cathedral’s modernist Safeway will soon be no more. Thursday night, staff moved the grocery store’s stock into the section that has been built over the last several months, and yesterday morning the new half officially opened for business. That clears the way for demolition of the 13th Avenue icon.

I checked the new store out for the first time a few hours ago. It was a little disorienting.

We tend to shop in small batches every day, so I’ve been to the old Safeway an awful lot over the six years we’ve lived here. I’m pretty at home there.

The interior of the new building looks almost identical to the interior of the Safeway near my dad’s place. So there I am, walking around what looks like my dad’s Safeway but it’s staffed by all the people I know from my Regina Safeway.

I couldn’t help thinking, “What the hell are all you people doing in Edmonton?” 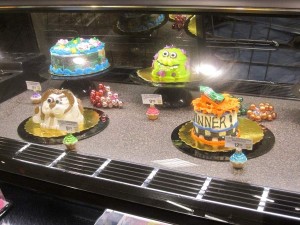 Anyway, the new section of the store seems to be quite a bit bigger than the old one and there’s a bunch of new items on the shelves. The aisles are wider and the checkouts are easier to maneuver. But yeah, while I think P3 Architecture has done a pretty decent job of distinguishing the building’s exterior from the blander suburb design of, say, my dad’s Edmonton store (while operating within the constraints of the Safeway-mandated box-store slab design), the interior doesn’t distinguish itself very much.

I’m not complaining, exactly. I’m just saying I find that, like I said, disorienting.

Wait, have I just written a review of a Safeway store?

I think I have. 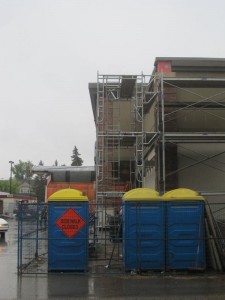 I’ll give the new section of the 13th Ave Safeway three and a half very generic prairie dogs out of five. (And really, who can tell prairie dogs apart? Except maybe other prairie dogs.) Maybe they can bump that up once the rest is open.

Meanwhile, for those already feeling nostalgic for the old Safeway’s doomed arch, check out Mysteria Gallery. Last I was by there, there was a Heather M Cline painting in the front window of the old building from before construction began. It’s great and I’d have bought it if I could afford it.