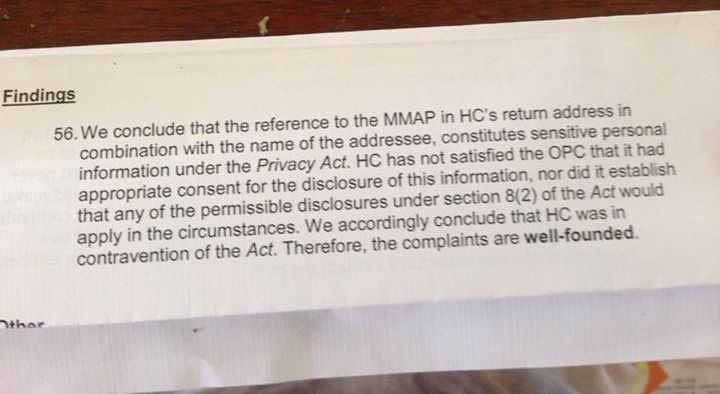 Above is a photo that’s making the rounds of a Facebook page maintained by an advocacy group for Canadians who use marijuana for medical purposes. In 2013, you might recall, Health Canada was in the process of changing regulations related to how people who were licensed to use marijuana for health reasons were able to access their medication.

The biggest change was that after April 1, 2014 licensees would no longer be able to grow their own medication but instead would have to purchase it from a grower licensed by Health Canada. The changeover hasn’t gone as smoothly as patients would have liked and, in fact, licensees under the old regulations are currently in litigation to have the new provisions declared unconstitutional for unjustly infringing on their health and well-being.

While all that was going on, Health Canada sent envelopes to the approximately 40,000 licensees in mid-November 2013 reminding them of their obligation under the new regulations to dispose of all their plants and existing medication by the April 1 deadline. In contrast to the usual steps Health Canada took to protect the privacy of the licensees’ health information (primarily by using unmarked envelopes delivered by courier) Health Canada elected to use the regular postal system and envelopes that clearly identified the recipients as participants in the medical marijuana program.

Health Canada claimed later that it was an administrative oversight. But licensees were understandably upset, both at the breach of their privacy, and the potential threat the letters posed to the safety and security of them and their families by publicly outing them as possessing marijuana. They regarded it as an attempt by Health Canada to intimidate them and cow them into complying with the new regulations.

A privacy complaint and class action lawsuit were subsequently initiated, and as the above image indicates, the Office of the Privacy Commissioner of Canada has found that the plantiffs’ privacy rights were contravened by Health Canada. A Federal Court challenge is currently underway, and the privacy commissioner’s ruling should be a pretty powerful piece of evidence when the plaintiffs return to court in Vancouver in early May.