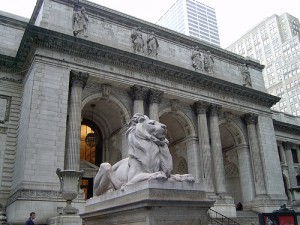 The New York Public Library celebrated 100 years today! This past weekend was a flurry of activity at the Stephen A. Schwarzman Building at Fifth Avenue and 42nd Street, which opened on May 23, 1911. There were readings and panel discussions (Adam Gopnik even moderated a couple of them!), and a tour of the stacks! There are 75 miles of them! And three  million books! Dear readers, I can tell you that, on the weekend upon which the world was supposed to end, there was no finer place to be.

The whole event was pretty inspiring. And moving. In spite of the fact this is happening at a time when more and more libraries across the U.S. are being radically cut back or axed altogether, or worse.

In honor of the occasion, the NYPL and Penguin books have published a commemorative paperback entitled with the library’s new slogan ‘Know The Past, Find The Future’ (isn’t that the best slogan for a library you’ve ever heard?). It features many cool and interesting people (check out the link and see) who reflect on their favourite items in the library’s collection, and they’ve been distributing free copies to patrons throughout the NYPL’s branches. Now that’s civilized.