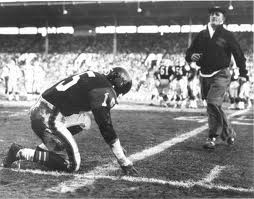 At a CFL alumni event on Saturday, two old rivals — former Lions’ QB Joe Kapp and Hamilton Tiger Cats D-lineman Angela Mosca — came to blows while they were being honoured on stage.

In 1963-64 the two teams met in consecutive CFL championships. Hamilton prevailed in 1963 by a score of 21-10, B.C. in the 1964 Grey Cup by a score of 34-24. In the first game, though, Mosca put the Lions’ star running back Willie Fleming (pictured at left) out of the game with a late hit after Fleming had been tackled out of bounds. Nearly 50 years later, the incident apparently still has the potential to cause hard feelings.

If you want to see two guys in their 70s duking it out, here’s a link to video of the incident.