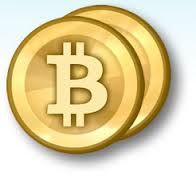 Pictured at left is a bitcoin. It’s a digital currency that was first conceived of in 2008. It was embraced by the digitari and has been used for awhile now to make on-line transactions via computer or smart phone.

On-line retailers like bitcoins because they get to avoid credit card charges that eat into slim profit margins. And consumers like them too because they’re easy to use. Bitcoins have even started to seep into the bricks and mortar economy with vendors accepting them in payment for goods and services.

In essence it’s a rival currency to our traditional state-issued currency. The latter is the very basis of our economy. But when you get right down to it, the only reason dollars hold the value they do is because we believe collectively as a society in their worth.

Bitcoins, potentially, are no different. They’re issued through some mathematical formula that controls how fast they’re released into the digital economy — kind of like a central bank. A hard circulation limit of 21 million bitcoins has been set, and that won’t happen until 2140. That will help keep a cap on inflation of the type that we experience now when central banks increase the money supply for fiscal policy reasons and prices rise.

One concern governments have is being able to track the bitcoin economy to ensure the proper taxes are collected. As awareness about the bitcoin grows, people are checking it out. But cautiously, it seems, and recently there’s been wild swings in the currency’s value. On April 10, for instance, it dropped from $266US to $105. But then supporters rallied and it bounced back up to $160. So it will be interesting to see how this pans out.