CORRECTION: Everything I wrote below is WRONG WRONG WRONG. I explain and apologize here.

Phew! Good thing I’m in Malta and not in Regina otherwise I might have felt compelled to cover the city’s 2015 budget. It was passed last Monday and I wasn’t there to watch. I don’t even remember what I was doing instead but I can assure you, it was a lot more fun than sitting in Henry Baker Hall for five hours.

So, sorry, Regina. No live-tweeting a read-through of the budget this year. No getting cranky about property taxes.

But if I was going to… I’d probably start by taking a look at a claim that’s being repeated in a lot of the budget coverage: This year’s record investment in road repairs. The inadequacy of the road renewal budget is something we’ve been writing about for years so it’s something I like to keep an eye on. And, from what I’m reading, it sounds like city hall is taking a historic step towards remedying this enduring problem.

See! Here it is, mentioned on page two of the city’s 2015 Budget Highlights document:

Sorry. Got a little excited there. Left my notes in place.

Of course, if I was covering the 2015 city budget and not sitting outside drinking a Cisk beer on a clear Maltese night, I might read that line in the Highlights document and think, “$18 million on road repair is a record? Gosh, that doesn’t sound quite right.” And then I might go through my collection of old budgets.

Good thing I deleted all my Prairie Dog files before I came here!

Oh shit! Look at that! Seems I forgot to kill the “Old Regina Budgets” folder. Wonder what the 2014 Budget Highlights document says?

Would you look at that. Seems they’re claiming 2015’s road repair investment of $18 million is a record even though 2014’s investment was $1.7 million larger.

What could be going on here? Even the creators of infographics as hilariously bad as this one couldn’t screw up their list of budget hot facts this badly, could they?

Well, if you’d read the budget documents — which, I told you, I totally wouldn’t do — you’d find that no, technically they didn’t. There’s more to the road renewal budget than that line would indicate.

Here. Have another look at the 2015 Budget Highlights document (with updated notes by me): 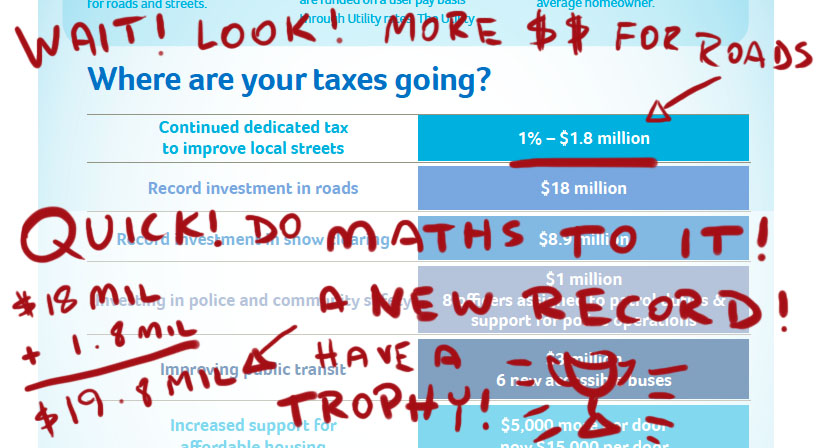 And that beats last year’s road renewal budget by a whopping $100 THOUSAND dollars!!

Gosh. That’s like beating the world record for running backwards by a hundredth of a second.

But, hey, can I really be sarcastic about a feat like this? I haven’t beaten any records lately (unless there’s one for cans of Cisk consumed while reading a Regina municipal budget). Meanwhile, the city is actually and truly beating the record for investment in road renewal this year. And as we all know, beating a record is a Very Impressive Thing.

Except when it’s not.

See, if you, unlike me, had started reading the Budget Summary, you might have noticed this line from page 28…

Hunh. Seems the inflation rate that the city is facing this year is 3.34%. Wonder how that $100 THOUSAND increase to the road renewal budget stacks up against that? Time for more maths.

And that means 2015’s record investment in road renewal is effectively a 2.7% DECREASE to the road renewal budget.

With the exception of 2010, every year’s investment in road renewal (the green line) has been a “record investment.” Yipee.

And, it’s also worth noting that, since 2007, the road renewal budget has grown, on average, by $1.1 million. This year’s $100 thousand increase falls WAAAAAAAYYYYY short of that. And even last year’s big increase of $1.6 million doesn’t look so outstanding in context. Sure, the boost was quite a bit above the average, but that just offsets years like 2009 and 2012 that saw bumps that were well below the average, or years like 2010 where the budget actually dropped in non-inflation-adjusted numbers.

Of course, despite all this, some people will look at the 2015 Budget Highlight document and tell me, “So what? Sure, the road renewal budget may technically be going down if you consider details like ‘inflation.’ The important thing is the city is DEDICATING an annual one per cent mill rate increase to renewing residential roads. THAT’S big news.”

Yeah, that one per cent mill rate for local roads sure sounds like new money, doesn’t it? And the fact that council has promised to ear mark that one per cent for five years, sure makes it sound like the road maintenance department is finally getting that long-term guarantee of additional funding like they asked for at last year’s budget meeting, eh?

It sure sounds like all that… Except that’s not the whole story.

Technically, this year’s $1.8 million for local roads is an extension of a program that was started last year when council voted to devote $1.7 million — a one per cent mill rate hike — towards fixing local roads. So while it looks like they’re adding $1.8 million to the annual local road renewal budget, they’re really only increasing the budget by that magic $100 THOUSAND.

And we already know how impressive that looks when it’s compared to the inflation rate.

Plus, the main budget for road maintenance — most of which will go towards taking care of feeder roads and other priority streets — is only going to be $18 million. That’s $100 THOUSAND less than the “record” road renewal budget for 2013. And that’s not accounting for inflation.

So, while council is making a big deal of how they’re prioritizing local road renewal — and how, brave heroes that they are, they’re willing raise property taxes to do it — they’re doing so by holding the core maintenance budget at below 2013 levels.

And meanwhile, in other city council news, they’ve also put the Local Improvement Program on ice. That was the program by which the city fixed sidewalks by charging property owners for the work. Whether you think that system was fair or not, at the end of the day, getting rid of it means that for the time being road maintenance is going to be even more starved for cash.

But it is a good example of how you can shuffle numbers around to make it look like you are. And I’m thinking that despite all this talk about taking potholes seriously, we’re not going to see a huge improvement in our streets and sidewalks any time soon.

Well, good thing I’m in Malta this year and TOTALLY NOT covering the 2015 budget. This is the kind of stuff that could make a guy all cranky.

Have a happy holiday, Regina. I’ll drink a Cisk for you.