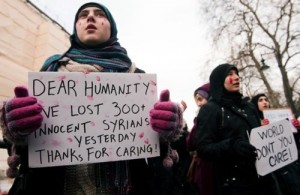 A protestor holds a sign during a demonstration against the Bashar al-Assad regime’s crackdown on pro-democracy protests, outside the Syrian embassy in central London, on February 4, 2012. The previous night, protestors broke into the embassy after reports came in that the Syrian Government had continued their heavy crackdown on demonstraions in the country, killing at least 200 civilians in the city of Homs. AFP PHOTO / LEON NEAL (Photo credit should read LEON NEAL/AFP/Getty Images)