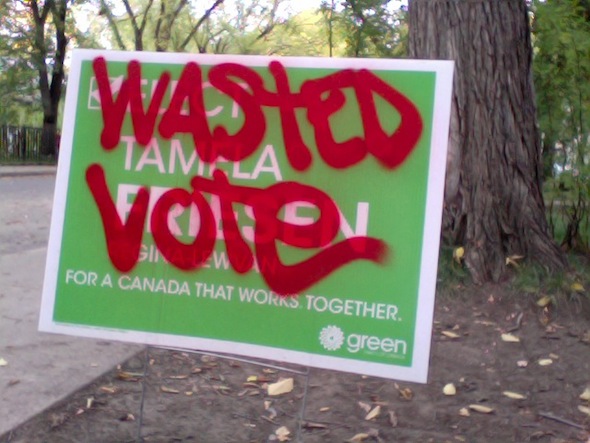 We have a Green Party sign on our front lawn and last night somebody spray painted “wasted vote” across it.

You know the election’s close and emotions are running high when even the taggers and vandals are thinking about strategic voting.

I’m not even a little bit annoyed that our sign was defaced. It’s an important election and when shit like this happens it just means people are paying attention. Plus, it gives me an excuse to tell the story of why we have that Green Party sign.

For the record, my plan had been to not have a sign on our lawn. I keep hoping that candidates will come door knocking at our place. I love elections and debating politics on our doorstep with the people campaigning for our votes seems like a great way to celebrate the season. If I put up a sign that’d just reduce the odds that some Regina-Lewvan hopeful will drop by.

Of course, in three elections, no candidate (save one, I’ll get to that) has ever come to our house. Last election, we even put up a sign that read, “Undecided voters inside. Please knock!” and we didn’t get a single visitor from any of the parties.

Anyway, as you can probably imagine, there are a lot of discussions about politics around our house, a lot of angry ranting over the breakfast table. It’s so bad that even our kids are getting in on the act.

And Dash, our four year old, decided at some point that he loves the Green Party.

Mainly, it’s because he likes their signs best. They’re green, a colour he prefers to red and orange; and, the party’s logo kind of looks like a sun and he thinks that’s “pretty cool.”

But, as election season was starting up, he was becoming increasingly perturbed because there were so few Green Party signs around.

And he wants the Green Party to win the election. It’s very important to him. But they didn’t have enough signs.

Finally, there was one Thursday where we were coming back from preschool and he was going on and on about the Green Party and why aren’t they winning and where are all the Green Party signs. He was inconsolable.

So I said, “Dash, you know we can just get a Green Party sign for our lawn, right?”

And he immediately perked up. The minute we got home we had to go to the computer and fill in an online “Request a sign” form. I figured at some point someone would come by while we were out and put up a Green Party lawn sign and that’d mollify Dash for a few days.

“That’s really weird,” she replied. “How do you know that? Nobody knows who I am.”

“Becaaaause we just ordered a Green Party sign. That is why you’re here, right?”

Turns out, no. That wasn’t why. She’d been out canvassing all day and hadn’t checked the messages from her website yet. It was just a coincidence that she was in our neighbourhood.

So I was pretty happy. Friesen was the first — and still only — candidate to ever come to our door.

And she seemed pretty happy to wind up on the doorstep of a supporter.

So I called Dash down.

Now, like I said, Dash is four, so, by nature, pretty fickle. I figured he’d come downstairs and maybe be kind of shy or even uninterested.

But no. When I said, “This is Tamela. She’s the person running for the Green Party,” he lost his frickin’ marbles.

He was shouting “Green Party! Green Party! I love the Green Party!” and jumping up and down and gave Friesen this big hug. He couldn’t have been more enthusiastic.

And when it was time for Tamela to go she promised to come right back with his sign.

That was pretty fun, I thought. But Dash went back to playing in his room and I figured now that he got that out of his system, that’d be it.

We just happened to be outside when Tamela returned with the sign. It was just after sundown and once again, Dash lost it. He was dancing around and shaking his butt and hugging Tamela. He was like a little Green Party party.

Friesen has a video of him on her Facebook page. I couldn’t be more proud.

So anyway, yeah. That graffiti artist who defaced our Green Party sign? He thought he was striking a blow for strategic voting.

But really all he accomplished was to BREAK MY FOUR YEAR OLD’S HEART!!!