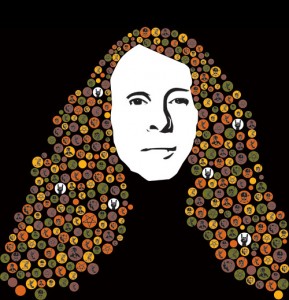 This story by Chris Belsito originally appeared in the March 15, 2007 edition of prairie dog as part of a preview for Ronnie James Dio’s not-officially-Black-Sabbath-but-c’mon it’s-totally-Sabbath Heaven and Hell tour, which played Regina on March 16. The art is former art director Nigel Hood’s, and was used in one of my all-time favourite covers.

In the beginning, there was a riff.

From the opening notes of the eponymous Black Sabbath it was clear that something new had been born. Similar perpetrators of “heavy”, as it was called—bands like Iron Butterfly, Blue Cheer or even Deep Purple—did not have this, whatever it was.

For us, growing up, there were always indisputable reasons to explain why we loved the music we loved. For Black Sabbath, we knew: a) they were from Birmingham, England, the same place that J.R.R. Tolkien was from (this was somehow very important); b) a black-clad guitarist with big bouffant hair and bad facial follicles named Tony Iommi was at the centre of the Sabbath wheel; c) the mysterious green lady on the cover of their first album somehow increased the band’s authenticity; and d) they were most certainly cooler that Paul Williams, Meat Loaf and the Carpenters combined—and knowing that made us most definitely cooler.

We absorbed the dark sounds and morose subject matter wholeheartedly. The music spoke to us. Although we were never quite sure about what, we knew it was important and it was something others in our peer group weren’t smart enough to understand. The rainy, industrial sounds of Sabbath made perfect sense in the isolated, snow-laden landscapes of Canada. Iommi as ringleader, with Bill Ward, Geezer Butler and a manic singer in a white-frilled outfit nicknamed Ozzy fulfilled the dark riff’s promise.

Sabbath was magical for a time, but after a handful of classic albums the band’s ascension was cut short by excess and increasingly destructive band behaviour. This culminated in a couple of confusing, cocaine-fuelled vinyl outings and reports in Circus magazine that the lead singer was locking himself in hotel rooms for days at a time while his opening acts—like the little-known Van Halen—blew Sabbath off the stage.

Ultimately, this led to the ousting of Ozzy—a man who would in time become increasingly less mysterious, less dark, less Birmingham and more willing to play the role of the rock and roll buffoon.

At the time, our opinion of Ozzy was much different. Sitting in a panelled basement bedroom with Vol. 4’s “Changes” playing in the background, I discuss the early demise of the Sabs—just as metal was really taking off—with one of my “cool” friends. The rock magazines were filled with talk of the scab replacement who was to take the sacred mic. Through the smoke-filled haze of the bedroom, I look over and realize my friend is actually weeping over the thought of a new singer.

After a moment of extreme awkwardness, I decide it is time to either: a) console him; b) quickly change the subject and the music to something safer like Trooper; or c) quickly go home for supper.

Deciding I was hungry and it was time to go home, I did take note that our music indeed had a more powerful hold on us than expected.

What my teary-eyed friend didn’t know was that the end of Ozzy was in fact a new beginning. Soon a new visage would adorn his postered, wood-panelled walls.

Enter Ronnie James Dio. A dark horse, an outsider and an American (gasp). On paper, he was someone who knew nothing of the industrial gloom of Birmingham, a fact that was somehow important to us. From photos in Circus and Creem magazines we knew that Dio was not a pretty man nor did he look particularly young—two prerequisites for the coming MTV age. But Dio was a man with a musical pedigree, having played in Ritchie Blackmore’s post-Purple project Rainbow, a band that our uncles and older brothers knew. Prior to that, he had sung for Elf, a band that everyone claimed to have heard but whose albums were never stocked in any of the local record stores.

Such is the revisionist memory of the aspiring metalhead. On most counts, Dio seemed to be the opposite of his hand-clapping, coke-smiling, overweight, leap-frog jumpin’ predecessor. Yet we had to admit that his black locks and dark, medieval-inspired clothing blended in with the Sabbath image and that in many ways he felt more British than Ozzy. Once we found out “dio” was the Italian word for god, we finally realized we had something special on our hands.

Apparently, we weren’t alone. Heaven and Hell, their first album with Dio, brought the band out of a five-year slump, scoring platinum and giving Sabbath their first hit record in many years.

In 1980 we were listening to the Dio-led Sabbath sing up-tempo songs about the end of the world, the hypocrisy of the church and the urge to die young. In the era of Dungeons and Dragons, no role-playing was required with Dio. He gave us all the imaginative and medieval mysticism any teenage boy could possible want—all wrapped up in Iommi’s power chords. Dio’s lyrics spoke to us like no other ’80s pop star could. Sabbath offered an alternative. Metal hadn’t yet adopted the gloss, sheen and everyday popularity it would by the mid-’80s, and Dio’s lyrics were filled with gothic imagery in simple diametric opposites—easily understandable to the most daft of our circle. These were simple comparisons: heaven and hell; real and illusion; kings and queens; black and white. We got it and somehow it felt good to be connected to the world of magic and mysticism in a world of synth pop, Ronald Reagan and music videos.

I regularly tortured my English teachers with overanalyses of Dio’s lyrics.

Unfortunately, like Byron, Shelley, Yeats and other great romantics, Dio’s Sabbath would die a much too early death.

Before disappearing, Sabbath bestowed a classic song in the then-cool, animated Heavy Metal (a film we watched for the cartoon sex and tried to rationalize greater meaning into later), found a new drummer, Vinnie Appice, pumped out another studio album (Mob Rules) as well as a live outing with Live Evil. As the rest of the world was watching “Pac Man Fever” performed on the hit TV show Solid Gold, we revelled in the magic of “The Sign of the Southern Cross” pondering Dio’s question: how can an echo choose not to answer a certain sound?

Then, the Dio dream turned to ashes, disappearing almost as fast as it came. Although he went on to a solo career, the Sabbath period immortalized him forever. Rolling Stone reviews be damned; Heaven and Hell and Mob Rules were obvious deserted island picks for true believers.

When it was announced that Dio, Iommi, Butler and Appice would reunite under the moniker Heaven and Hell, I have to admit I was excited. My co-workers don’t seem to share my enthusiasm. I am fine with that. There is a circle of people from my past that I can e-mail to share my excitement with. We sit in our offices, secretly listening to our Sabbath, the Dio-Sabbath, waiting for the concert dates in our respective towns, knowing that only the inner circle knows who Heaven and Hell really is.