Clemente’s house is one of the few buildings in Joma with a roof. In fact, it’s one of the last structures still standing in the devastated area. From his front porch he can see the smashed bricks and mortar that were once the homes of his friends and neighbours. “Afterward, it looked like a tornado (had) blown through. Ripped and broke everything. You can still see where the foundations were.” He said, while surveying the damage in his neighborhood. But this destruction was no act of nature, weather or plate tectonics. In Joma, the catastrophe was man-made.

The village once housed around four-thousand people in a river valley just outside of Accra. Clemente lives in the pristine region with his mother, sister and brother and everyday he commutes to work in the capital’s business district. He says they’ve been here six years, but many of the displaced people had lived and fished there their whole lives, “we watch more go everyday. I don’t know where they go. I guess they just have to move on.”

At dawn on December 10th, residents were rousted from their homes and told the settlement they’d spent generations building was being torn down. Francis is a fisherman and a single father of eight. His house was destroyed that morning, “I was out on the water in my boat. Didn’t know what was happening until I saw my children on the shore-line calling me to come. They said military men were here breaking down houses.” He says he has received no warnings before demolition and no offers for compensation since. By evening, nearly 500 homes, several businesses and a school had been destroyed.

The disputed territory lies along the banks of the Densu river. The river is a part of the water table feeding the Weija dam reservoir. The Ghana Water Company (GWC) says the Joma settlement is illegal. In an official release, the GWC stated Weija is the critical fresh water source fueling Accra and say they can’t risk the possibility of encroachment contaminating the supply. However, Joma is several kilometers from the dam site and larger settlements exist along the reservoir’s edge. 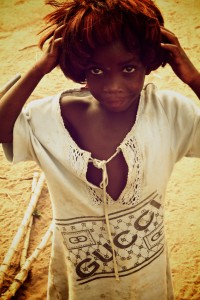 While military carried out demolitions, many villagers sought refuge at the Chief’s palace. Their respite was only temporary as the palace was also destroyed by order of the GWC. Chief Nii Ayittey Mayatse, says he thinks there are other motivations at play. “They tell us we are making the water dirty. We aren’t, we’ve fished here, lived here, died here for centuries. We take care of the river, it gives us life. They don’t want this land for them. They don’t benefit, they want to sell it. How can they? It’s our’s,” he says the dividing lines between government property and his ancestral territory is clear. “My Great-Grandfather started the building here. The land was his, the people (villagers) came and buy (it) from him. Now they want to take it and say we are here illegally. We are not.” A recent court injunction confirmed Chief Mayatse’s account. The decision ordered an immediate halt to the demolitions, but provided no provisions or compensation for repairing the damage.

WIth their homes in pieces, no school to send their children to and no money to rebuild many were forced to leave. The court-order stipulates un-occupied land may be annexed, but many have vowed to remain amidst their rock-piles and broken timber. The hold-outs say they have seen surveyors and trucks bearing the logo of Regi-manual estates, a real-estate developer specializing in pre-fabricated condo complexes, exploring the territory. They also say the have noticed an increase in military and police presence and report regular instances of harassment.