Good morning and welcome to the last days of May! We’re looking at a high of 18°C and a low of four, and if you have a rough day and need a patio pint later, good news: it’s going to be a sunny evening. A perfect match for this fine morning! Speaking of tonight: sunset is at 8:58 p.m., while sunrise was at 4:54. That’s almost 16 hours and four minutes of daylight. Huzzah! Here’s some news. Let’s start with Dimples McDickly’s big victory.

1. LIKE STEPHEN HARPER BUT WITHOUT THE EVIL STRATEGIC CUNNING Regina-Qu’Appelle’s member of Parliament somehow won this weekend’s Conservative party leadership. How about that. The farmers might’ve helped. The Leader-Post’s Barb Pacholik has a fine, Regina-focused piece on his rise while CBC’s Eric Grenier crunches the numbers behind Scheer’s unlikely defeat of front-runner Maxime Bernier. Read more on Scheer here.

What else? Well, if the reality-based world wanted to get upset over something they could point to Scheer’s late 2016 call to shut down CBC news. Bernier said public media puts the government in a “glaring” conflict but I think he was being dishonest. The real reason he wants to shut down CBC news? CBC reporting and analysis is (generally) good, and good reporting causes problems for dishonest politicians. It’s the old Harper playbook: destroy your critics because you can’t win honest debates. It’s why Harper muzzled government scientists and it’s why Conservative MPs so frequently refused interview requests.

Speaking of fact-averse notions: the CBC is a public broadcaster, not a government propaganda outlet. If it was run by the government, CBC would’ve given Stephen Harper an easy ride, right? Spoiler alert: it didn’t.

As for private media, anyone who wants to review how news companies treat their sacred mission of informing the public might want to check this out.

One last thing: radical Christian groups are cheering Scheer’s win. The anti-choice organization We Need A Law even sent me a press release congratulating Scheer:

“We recognize his commitment to consistent values, and appreciate his solid voting record. Scheer voted in favour of bills like Cassie and Molly’s Law and Roxanne’s Law, which show care for pregnant women and pre-born children. Pre-born human rights were highlighted during this campaign in a way they have not been for a long time. It is encouraging to see open discussion around the injustice done to pre-born victims of crime, and awareness raised about the prevalence of sex-selective abortion in some Canadian communities.”

2. TRUMP… SHRUG So his son-in-law wanted a secret channel to talk to Russia? How is this not treason? What can you even say. No wonder Europe’s pulling back. Keep alienating your allies America, I guess.

3. THE END OF STC Awful. An essential public service is being trashed and good jobs are being wiped out because #BradBungledTheBoom. Everyone knows that any private company picking up the STC slack will demand and get handouts from the government, right?

4. CANADIAN DOCTORS APPARENTLY THINK MARIJUANA LEGALIZATION WILL HARM TEENS Despite the fact that Canadian teens are already huge potheads even though Marijuana is still illegal. Well, I’m skeptical it’s possible to make a law banning people from smoking weed until they’re 25 so Canada just might have to go the public education campaign/cross your fingers route. I know one pro- legal pot newspaper that would be thrilled to run ads expressing factually supported concerns about marijuana…

5. A GOOSE-STEPPING, NAZI-SALUTING WHITE SUPREMACIST SLAUGHTERED TWO PEOPLE IN PORTLAND ON SATURDAY And mainstream U.S. media treated it like a regular crime, which they wouldn’t do it the killer was Muslim. Double standard much?

8. HOW ABOUT THAT STREET FAIR? The Cathedral Village Arts Festival wrapped up this weekend with glorious sunshine and happy throngs of people, including some scoundrels who broke the rules and brought their pets. I took a few phone photos. Look! 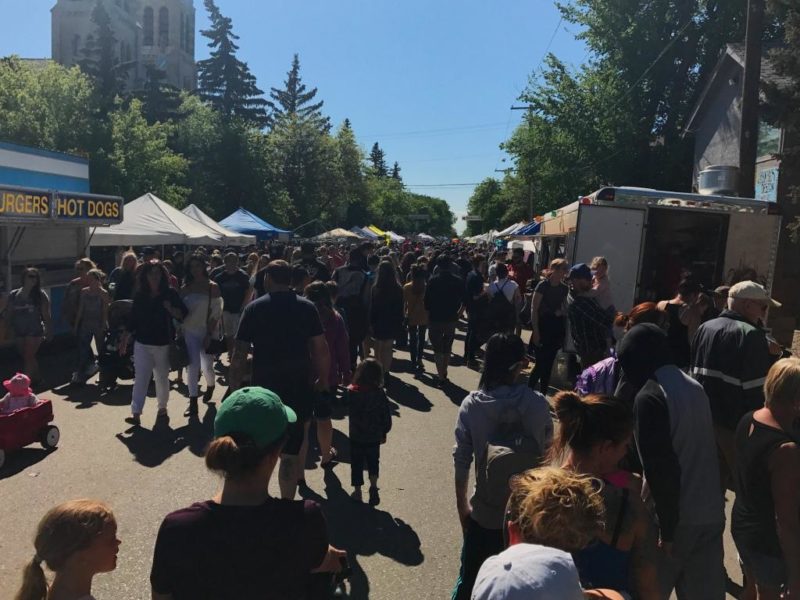