Colorado Springs Residents Are Probably Too Stupid To Live

Whitworth’s Global Warming Post was The Theory, Here’s A Look At The Evidence

Bob Cesca is one of my favourite American bloggers, and one of his most recent posts – with information from Bloomburg News – perfectly illustrates how the ‘don’t tax me, ever’ crowd and the global warming deniers in the United States have sown the seeds of their own destruction.

Colorado Springs is the Ground Zero for the American conservative movement – home to Focus On The Family, home of the United States Air Force Academy (the USAF is home to the greatest concentration of religious nutbars in the American armed forces) and the political base for one Dick Cheney. Last week, wildfires ravaged suburbs around the city, and, well, take it away Bloomberg News …

The city where the Waldo Canyon fire destroyed 346 homes and forced more than 34,000 residents to evacuate turned off one-third of its streetlights two years ago, halted park maintenance and cut services to close a $28 million budget gap after sales-tax revenue plummeted and voters rejected a property-tax increase.
The municipality, at 416,000 the state’s second-largest, auctioned both its police helicopters and shrank public-safety ranks through attrition by about 8 percent; it has 50 fewer police and 39 fewer firefighters than five years ago. More than 180 National Guard troops have been mobilized to secure the city after the state’s most destructive fire. At least 32 evacuated homes were burglarized and dozens of evacuees’ cars were broken into, said Police Chief Pete Carey.

Sounds insane? Yeah. It gets better:

Six of the nine candidates in last year’s nonpartisan mayoral election, including the victor, Mayor Steve Bach, signed a pledge to oppose any tax increases.
Richard Skorman, one candidate who didn’t, was flooded with angry e-mails after saying in a debate why he opposed such a pledge. What, he asked, if the city got hit by a major wildfire?
“Resources have been very stretched, and we were always worried,” Skorman, a 60-year-old small business owner and former city councilman who lost to Bach in an April 2011 run- off, said in a telephone interview.

If you live in a house like this, then you have no farking business complaining about the amount you’re paying in taxes. 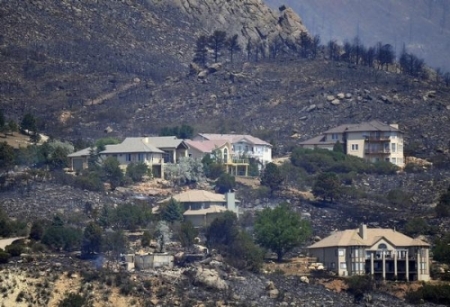 If I’m an insurance company, there’s no way in Hell I would authorize a damage claim payout. The citizens of this community refused to pay for the basic level of fire and police protection – that’s negligence.

I wonder if any of those Bible thumpers in Colorado think that God is punishing them, the same way many of them thought God was punishing New Orleans with Hurricane Katrina. I wonder if any of those Tea Party activists who decry any form of government spending now wonder whether it would have been better to spend their money on paying for firefighters and police. Or maybe when scientists say that global warming is a problem, you don’t tell the world to look the other way because it might interfere with your lifestyle.

Naw. Not while there are gays and abortion seekers around. This is America, remember?

So who pays when people can’t pay – or in this case, who WON’T pay? That’s right. Everybody else. The state of Colorado sent in National Guardsmen to patrol the area and assist firefighters because the municipality’s voters voted in politicians who LAID OFF MUNICIPAL POLICE OFFICERS AND FIREFIGHTERS! So, who are the freeloaders? Who are the ones sucking off the public teat, expecting the world to pay for their mistakes? That’s right: Mr. And Mrs. Tea Party.

If they don’t learn anything from this disaster – that public works are an important way to keep you homes safe, that you’re not safe unless your community is safe, and that nobody wins until everybody wins – it’s possible that Tea Party types in general, and Colorado Springs residents in particular, probably are too stupid to live.