In the most recent Ultrasonic Alarm Call (that’s the prairie dog podcast) I did a series of city hall updates, and among them was some info on the soon-to-be-opening City Square.

When we were recording, I said that the plaza would be open a week before the Folk Fest. And, as commenter anonymous points out, that would be like the day after tomorrow.

Well, that was the plan like three weeks ago when I first interviewed city square project manager, Denise Donahue (who I misidentified as the “general manager of the downtown” in the podcast — I don’t think there is such a position, btw). But, as you can probably guess from the pic at left and the pics below, there’s still a lot of work to go on the plaza.

In fact, I interviewed Donahue again shortly after the podcast, and it sounds like opening a week before the fest is not going to happen. How come the delay? Well, you can blame the weather again. Donahue says that high humidity isn’t great for laying paving stones. And apparently that night of storms we had a week or so back washed away all the sand they’d put down.

All together, it put them behind by a few more days.

But, last I heard (via a press release from city hall), they are still on pace to have the fences down for folk fest. The plaza won’t be complete. But it will be done enough so that it can be home to the crafter market and the beer tent.

So, yay! I guess. Now we just have to keep our fingers crossed that we don’t get another torrential downpour between now and next weekend.

Incidentally, you can read more details about the city square project in the next issue of the prairie dog, which will be hitting the streets sometime today.

And now, by request, some pics of the plaza which I took yesterday afternoon. Click to embiggen. 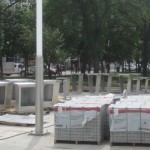 One thought on “City Square Update… With Photos!”