As you’re likely aware, Saskatchewan is in the midst of a five-month campaign to choose an official fossil.

We did a cover feature on the project in late November where we highlighted the seven nominees that had been put forward by the Royal Saskatchewan Museum and other organizers and outlined how the voting worked.

In a follow-up blog post a few days later, I said that while all seven fossils/species (such as the short-necked plesiosaur pictured above) were worthy candidates  to represent the province as an official emblem there was really only one choice — Scotty the T. rex.

To begin with, the Tyrannosaurus Rex is one the best-known dinosaur species. As far as carnivores go, it was pretty bad-ass. And no other province or state has yet selected it as their fossil. So it’s got a huge upside as far as promotional value for Saskatchewan. Plus Scotty is one of only around 20 partial T. rex skeletons ever found, and it’s pretty much the largest and most complete one in the world.

On Feb. 17 Royal Saskatchewan Museum paleontologist Emily Bamforth issued her own endorsement of Scotty as Saskatchewan’s official fossil in a blog post titled “Why My Vote Is For Scotty”.

Voting’s on until April, in-person at the RSM where the fossils are on display, with an on-line component being added for the last two weeks or so. So cast away everyone.

In 2013, you’ll perhaps recall, a group of Regina filmmakers got a proposal together and entered a national competition in the hope of winning some serious six-figure financing to bring their project to the big-screen.

Through several months of crowd voting and jury deliberations, the filmmakers succeeded in advancing round to round until finally they were the only ones left standing.

The name of the film they were pitching, of course, was Wolf Cop.

Now, CineCoup is back for another session of cinematic excitement. And Regina has another entry in the race. Like Wolf Cop, Patient 62 is in the SF/Horror genre. Written and produced by Rick Anthony, with partners Bryce Schlamp (director) and Glenn LaPointe (marketing), the story-line for the movie involves a man named Lucas Chase who is trying to track down his estranged sister.

Possibly conceived before Saskatchewan premier Brad Wall did a 180 on the issue of licensed strip clubs, the film’s premise involves the sister working as a stripper. Haunted by nightmares that she may have been abducted, Lucas sets out to find her.

You can find out more about Patient 62 and the other 74 entries in CineCoup 2015 by visiting the CineCoup website.  The first round of voting begins Monday April 6 and runs to Friday April 10. That will see the number of entrants reduced from 75 to 60.

Additional rounds of voting will be held Monday April 20 to Friday April 24 to eliminate 30 more hopefuls, with that number dropping to 15 during a third round of voting from Monday May 4 to Friday May 8.

So good luck to Rick, Bryce and Glenn in their quest to follow in the pawprints of Wolf Cop.

About three weeks ago we ran a contest for a  Ghost Towns of Saskatchewan poster by former Prairie Dog art director Nigel Hood. Nigel’s gorgeous print, made by Saskatoon’s Hard Pressed, is comprised of logos for real-live, er, dead, Saskatchewan ghost towns — the logos commemorate and celebrate these lost places. It is very, very beautiful.

(You can read more about The Ghost Towns Of Saskatchewan here.)

To win a poster, Prairie Dog readers had to explain why they deserved it (because I wasn’t going to give this beautiful thing away to some contest-junkie who could’t care less about art and Saskatchewan). By the deadline, we had 32-ish entries. All of them deserved to win. Even Barb Saylor’s!

But there can be only one champion, and to I bet no one’s surprise, I picked Nigel’s high school art teacher, Tammie. Here’s what she wrote.

Her last line clinched it: “Art matters! Art is magic! And yes, you can make a living by creating Art!”

That’s something kids need to hear.

For the sad, sad people who didn’t win: good news! We’re selling these posters, and you can e-mail me for information.

Look for a second PD Ghost Towns contest later this year. I bet Planet S will give a poster away at some point this fall, too. 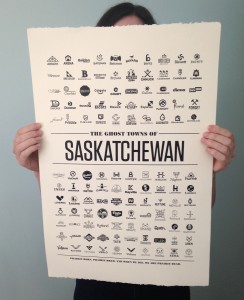 UPDATE: CONTEST CLOSED! But good news! you can still purchase The Ghost Towns Of Saskatchewan by e-mailing me here.

Note: this post will remain at the top of Dog Blog until the contest ends on Thursday, Aug. 21. Until then, look for new entries below.

The new Prairie Dog has a great interview by Aidan Morgan with expatriate Sask. graphic designer Nigel Hood about his new poster, The Ghost Towns Of Saskatchewan. Nigel’s poster has custom-designed logos for 120 actual Sask. ghost towns, including Battrum, Bounty, Dnieper, Neptune, Smuts and many more.

And you know what? We’re selling the poster out of our office (e-mail us for information)!

Even better: we have a few to give away. Wooo!