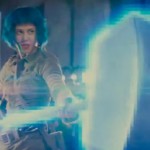 Finally saw Scott Pilgrim vs. The World tonight, with Dechene and Steel. Swell movie. Not really like anything I’ve seen, and lots of fun. In fact I predict it will be a classic — people will be watching it in 10 years the same way they watch Ferris Bueller’s Day Off or Napoleon Dynamite now. Here’s what you need to know about this neat movie.

1.) It’s a rock and roll, retro-videogame romance movie. If you like indie rock, ever owned a super Nintendo or played games like Tekken or Mortal Combat in an actual arcade, or ever dated anyone, there’s a good chance you’ll like it.

2.) It’s directed by Edgar Wright, the guy behind Hot Fuzz and Shaun of the Dead. Wright might be the best there is at using fast-cut editing to tell a good story. The movie is very, very cluttered with stuff but it’s also very well organized and it’s always clear what’s going on. Very few directors can manage this, which is a damn shame.

3.) This is an unusually sex-positive movie. There isn’t any nudity (I don’t think),  just a couple of tame make-out scenes but the characters all seem to be… normal young people with realistic attitudes to sex. And there’s no big drama about virgins, for one thing. Hollywood movies almost always make a big, fetishized deal about someone losing their virginity. Which is creepy. Not this movie. Nice change. Of course that might explain the next point…

4.) Scott Pilgrim Vs. the World is tanking at the box office. Huge flop. Massive. I guess Americans can’t handle normal human sexuality. I went to this movie to forget about the United State’s mental problems, but nope, I can’t get away from that screwed-up country’s cultural hang-ups. Also…

5.) It’s set in Toronto and it’s openly-Canadian. Which is probably a bigger sin in U.S. multiplexes than being openly gay. That probably doesn’t help Scott Pilgrim with self-absorbed American audiences. On the plus side, Toronto has a couple papers like prairie dog — Eye Weekly and Now — and they both get cameos in the movie. Yay! Go team indie newspaper!

6.) Finally Carle Steel really liked Scott Pilgrim Vs. the World. She larfed and larfed till she nearly barfed. So you should see it in the theatre this week, before it goes away due to epic profit failure. (You should see it even if you have to bum a ride all the way out to the Galaxy Cinemas.)

7.) Besides, if you don’t see it, Carle will move to Montreal again. Zut alors!