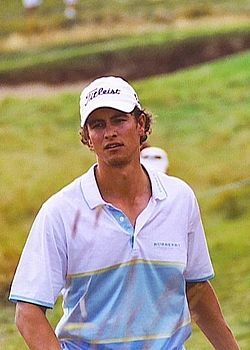 Things are starting to get ugly in the golf world debate on whether players should be able to use elongated belly putters that they can anchor against their body in place of the traditional short putter that you swing freely with your arms and hands.

As I observed in an earlier post, when so-called belly putters were introduced, they were dismissed as a novelty. But lately players like Adam Scott (pictured) who use belly putters have been enjoying a fair bit of success on the PGA tour and calls have been made for the putters to be banned on the grounds that they’re a perversion of golf’s core principle — namely, the physical and mental challenge of mastering a free-swinging golf stroke.

The other day golf’s two dominant governing bodies the United States Golf Association and the Royal & Ancient in Britain announced that starting in 2016 the putters would be banned. Many players on the PGA tour support the ban. But others, especially those who have been winning using the putter don’t. So the tour is somewhat divided. And some of the naysayers are even contemplating legal action.