Bang the Drum!: Life Itself

I wish I had discovered Paco Ignacio Taibo II when I was a teenager. Back then, I often read books with a notebook handy, writing down references to look up later. This was before the time of household Internet, so looking this stuff up mean, y’know, actually putting in some leg work. Luckily, back then, I was still spending a lot of time in High School (though not as much time as I was supposed to be spending), and didn’t even have to cross a street to get to a decent library. Jack Kerouac’s On the Road, borrowed and lost from the Evan Hardy Collegiate Library, filled a lot of pages. Some of my notes led me to great things, like Dostoevsky, Modigliani and Sonny Rollins. Some were dead ends (to me at 14, in any case), like Schopenhauer and Dexter Gordon. Kerouac’s other books would later steer me toward Buddhism, Lew Welch and Thunderbird wine.

Taibo’s novels have inspired a similar frenzy. His recurring independent investigator (“private sounds like somebody wants to sell Mexican oil,” Taibo says) Hector Belascoarán Shayne is a heavy reader and a music fan. Belascoarán puts on Gerry Mulligan records when he broods over a case. He seeks sleuthing advice in the pages of Ross MacDonald and Georges Simenon novels. In The Uncomfortable Dead, Belascoarán bases his interviewing techniques on Alec Guinness’s performance in the 1979 BBC adaptation of John LeCarre’s Tinker, Tailor, Soldier, Spy. In the non-Belascoarán novel, Leonardo’s Bicycle, Taibo’s stand in, Mexican detective novelist José Daniel Fierro so obsesses over the ephemeral minutiae of the career of Carlos Santana that the Wizard of Autlán must surely count as as much of a Taibo character as that other Carlos, the anarchist upholsterer who shares an office with Belascoarán. 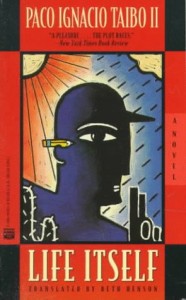 I don’t want it in all my art, and it certainly shouldn’t be a primary function of art, but I do love it when a song or a movie or a novel sends me off in search of something else. The reader becomes the detective, following clues, putting them all together to draw a new map of the central mystery, which is life itself.
I already liked Roadside Graves for their 2010 EP You Won’t Be Happy With Me, but when I read what singer John Gleason wrote about the band’s new album We Can Take Care of Ourselves, I really liked them:

My wife and I are both teachers, but we rarely talk about teaching beyond a good day versus a bad day. After a few years together and a few hundred dinners I realized the one exception was when she taught SE Hinton’s The Outsiders. During her Outsider unit our dinners were always punctuated with tales of students who hated reading suddenly being transformed and bright eyed at the prospect of reading a novel that related authentically to them without being dull.
We were careful to not retell the plot in song as bad Broadway; rather we focused on making more nuanced allusions to characters, themes, feelings, and settings. We tried to emphasize the sensitive, frightened sides of the characters, instead of showcasing their thick skin and greaser toughness. Musically and sonically, we avoided a retro sound and kept it thick and modern, with only occasional glimpses of melodies and tones that might have pumped out of their radios at night.

Emmet Matheson stays golden, intermittently, at A Bulldozer With a Wrecking Ball Attached. You can e-mail him at: bulldozerDOTwreckingballATgmailDOTcom