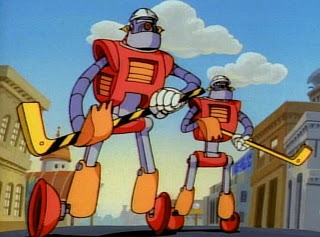 In this week’s Aw NHL Naw: Some summer jamz and some summer hamz!

Hot Penguin On Bear Action: Still hanging in there for playoff watching? Good news! The Eastern Conference Finals match-up is looking pretty sexy and not just because that Jaromir Jagr is a Hunkasaurus Rex! A Pens/Bruins series ticks a lot of appealing playoff showdown boxes.

Warning: Do not accept tea from Victorian era ghost Marc-Andre Fleury. It’s all part of his trap.

Award Tour: The nominees for this year’s NHL Awards have been announced. (WHO WILL WIN THE ESSO PARTICIPATON MEDAL FOR GIVIN’R?) I’m cool with the idea of the National Hockey League giving out awards to players for MEGA DEFENSE or GOOD ROOKIE MANNERS or whatever, but I’m always baffled why they have to have an award show go alongside it. It combines the boredom of award shows with the most boring athletes on the planet. I mean, the stars of the PGA and LPGA come across like fucking Street Fighter II characters by comparison.

Leagues like the NBA knock their award shit out during the playoffs, hand the winner their trophy at a press conference and it works just fine. The NHL’s all like NOPE! WE NEED TO HAVE A CEREMONY BECAUSE: WE’LL COME UP WITH A REASON LATER. Are you curious what a league made up of Ed Hardy enthusiasts wears to an award show? Do you have a hankering for F list celebs that are only presenting a trophy in exchange for 45 seconds of facetime on the NBC Sports Network? Can you only get aroused by banter about how “zany” Patrick Kane is? The NHL Awards are for you! Oh and you’re a bad person for allowing such a terrible thing to happen to an innocent populace.

Scary Monsters (and Super Creeps) (Also Toilet Ghouls): I’m going to go on a bit of a ramble about an old bit of VHS that put the fear of God in me.

When I was a kid, I was absolutely terrified of the Ghoulies series of films. More accurately, I was terrified of all “scary”-ish movies (including the Fangoria Award winning Ernest Scared Stupid), but Ghoulies freaked me out the most. Every time I looked at the VHS box art, I would become a petrified ball of scared yung’un.

THEY WERE MONSTERS THAT PRESUMABLY LIVED IN THE TOILET! A TOILET THAT LOOKS LIKE THE ONE I HAVE AT HOME!

I had no knowledge of what the films were about (research shows it was a bargain bin Gremlins knockoff), but the visual motif of “monsters in the toilet” scared the fuck out of me. It bothered me so much that there was a period of time in elementary school where I would not sit down on the toilet without checking to make sure there wasn’t a “ghoulie” ready to wreak havoc on my butthole. I don’t know what I would do if I encountered a creature of PG-13 level evil set to pounce, but goddammit I was going to be ready.

When hanging out with friends (who actually watched and loved real horror movies), I made up lies about the contents of Ghoulies. Using a thick coating of bullshit, I claimed that in Ghoulies 2, “a monster comes out of the toilet and bites a guy’s dick off”. I made up all sorts of elaborate scenes that never existed in a movie that I had never seen to justify my fear of it. (Dicks were bit! Butts were mutilated! Non-mutilated butts were rubbed on boobs! My fake movie had everything.) I moved away before anyone ever called me on it. Either that or no one had the heart to tell a hyperventilating nine-year-old that he doesn’t need to be scared of a crappy rip-off of Gremlins.

The weird thing about how scared I was of horror movies as a kid was that I wrote such violent and vulgar stories in grade school that my local school division sent me for psychiatric evaluation. (This is absolutely true.) I was scared of rubber toilet monsters, yet my writing was so disturbing it led my elementary school to demand psychological testing. The magic of words!

As of the date of this posting, I have not yet seen any Ghoulies films. Not that I’m inundated with constant television replays, fan conventions and local re-enactments anyway.

Hang out with Dan on Twitter or in the comments. He can help you figure out which Street Fighter II character best suits your roommate needs.

An Italian inventor often referred to as the father of long distance radio transmission. Known for his development of Marconi's law and his vocals in Love Inc. View all posts by Dan MacRae