Hockey: A sport that didn’t exist until children’s author Estelle Salata invented in the mid 1980s for her book Mice at Centre Ice.

Let’s talk about hockey, shall we?

Let The Crying For Assorted Reasons Begin!: How’s your season going so far? Are your dreams crushed into a fine powder yet or are you calling up Jostens to get fitted for a Stanley Cup ring?

(Important Ring Note B: Jostens does make class rings. So if you want to get a ring that says BONER ACADEMY, they just might do that for you. Of course, you couldn’t really stop there, could you? You’d have to get a BONER ACADEMY letterman jacket and change your CV up and things like that.)

The season’s only a week old and I’ve already gone through a series of wild mood swings.

The Jets lost their opener. (“Tank the season! Burn down the arena! Disband the club and turn them into a Polyphonic Spree type choir!”)

On Monday they pushed the Bruins to a shootout. (“What does this mean? Is this good? Where’s our place in the world?” *puts on The Littlest Hobo and sobs into an empty box of Teddy Grahams*)

And the next day they beat the Caps in Washington. (“Hooray! Also, does this mean I have diplomatic immunity?”)

It’s a fun time to be alive because everything is just panicky visceral emotion all the time. It’s like this season is one big red wine bender. Everything’s great and fucked and vaguely romantic at the same time. TRADE EVERYBODY NO WAIT KEEP THE CORE TOGETHER NO WAIT MAYBE THIS CLUB SHOULD BE A SLAMBALL TEAM INSTEAD NO WAIT *vomits cheap cabernet sauvignon all over the hardwood* GOTTA HAVE PASSION!

At this rate, I’ll be spending all of March in the tub and writing bad poetry on myself using Mr. Sketch scented markers.

Yakupov Strap Match: Blech, the fetishization of “respect” in hockey is the worst. Last night, Nail Yakupov scored a goal (an ice hockey goal!) that tied the game with less than five seconds remaining. He celebrated by sliding on his knees across the ice, which was something that you knew people were going to get pissy about because DERP RESPECT DERP BE RESPECTFUL DERP.

(“Be respectful” is a term I pretty much only hear when it’s some bro explaining why he punched a dude in the back of the head at the Olive Garden. “YOU SHOULD BE RESPECTFUL AROUND BROOK-LYNN CUZ SHE’Z A MOM!” *punch* “NOW YOU GOT BLOOD ON MY BILLABONG SHIRT, THAT AIN’T RESPECTFUL!” *second punch*, etc.)

The lead story on TSN.ca as I type this is “Your Call: Did Yakupov’s Celebration Go To Far?”. Why the fuck is this still a thing? It’s a man gliding across a sheet of ice in a game where people wear knife boots and have Rocky music playing to soundtrack grown men punching each other in the brain.  Calm down, it’s not a big deal. HOCKEY IZ ENTERTAINMENT. These players aren’t getting paid in sportsmanship dollars, they’re getting compensated with money. Heck, I hope Yakupov brings a motorcycle onto the ice after his next goal and rides it around singing Sha Na Na songs while tearing up pictures of the families of his opponents. Maybe he could flick a toothpick in the goalie’s face after. Boom! Take that, Jonathan Quick! Face full o’ picks!

There are roughly 4 1/2 players in the NHL with something resembling a personality. Please let them be themselves. Especially in Edmonton, because holy shit the Oilers are an insufferable franchise and there needs to be something redeeming if I’m going to have them shoved down my throat for the next five years.

Quick Note To Anyone Using The Term “Celly”: Go fuck yourself. It’s just a gross sounding word. I cringe so hard when I hear it that I’m starting to develop serious damage to my nervous system. Hockey players: Please look into giving people and things nicknames that aren’t just the original thing with a “y” or a “ers” crudely added on. Make the most of your fancy WHL education!

When Will Ryan O’Reilly Cash In The Money In The Bank Briefcase?: The Royal Rumble takes place this Sunday. Sadly, The Goon will not be one of the 30 participants.

Feeling Cautiously Optimistic About The Black Sheep Mask Though: So, um…this happened. 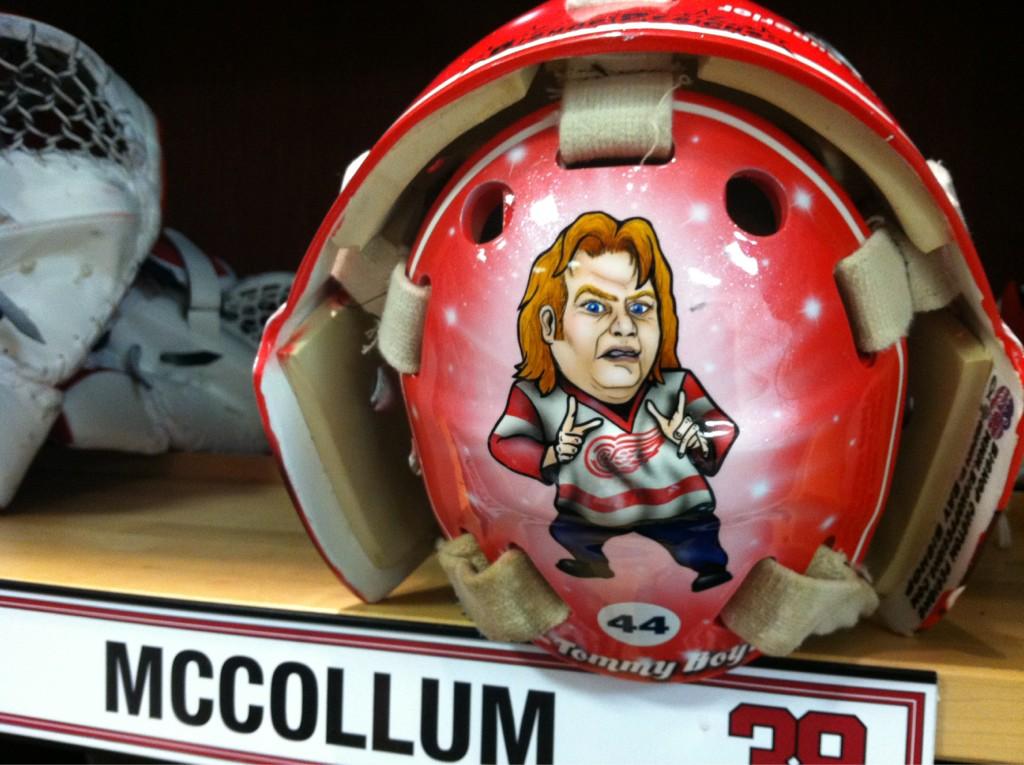 Quick, who’s that a caricature of on the back of Red Wings goalie Tom McCollum’s mask? Would you have guessed Chris Farley? Me neither. The Tommy Boy tribute art looks more like a weird deviantART take on what Louie from Life With Louie would look like if the show went on for ten more seasons. (And if his hands were slammed in a car door on a daily basis.) It might have made more sense to scrap the caricature and just replace it with the Callahan Auto Parts logo. Or better yet, Farley could have been on rollerskates. Everybody loves rollerskating.

h/t Bill Roose for tweeting this image into the world (Roose felt the attempted Farley looked an awful lot like Meat Loaf. He’s not wrong)

A Comment About A Stranger’s Appearance: Roberto Luongo looks like a version of Sacha Baron Cohen that’s perpetually trapped in a lifeboat in the Mediterranean. I’m not sure if this helps or hurts his trade value.

Hang out with Dan on Twitter or in the comments. He’s okay with pandas.