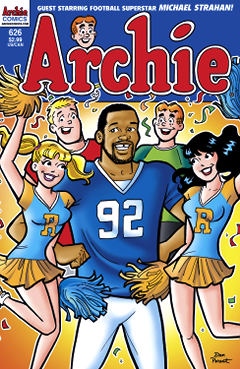 Aw NFL Naw is back for Week 9. It’s the column you can keep open in a different Google Chrome tab while you re-read the List of major crimes in Japan Wiki page at 2 in the morning.

Cannibal Holocaust Ain’t Got Shit On This: I went on a ramble about this before, but I tend to miss pregame shows. This is because: 1) They are uniformly terrible. 2) That case of Maximum Ice isn’t going to finish itself nor is it going to do punch the wall and wonderwhat the fuck you’re doing with your twenties for you. That said, something spectacular happened on the NFL Network pregame show that turned my brain into breaded deepfried WTF chunklets. There was a segment on NFL GameDay where all the on-air personalities dressed up in reaper costumes, growled proclamations of death in an AstroTurf graveyard and tried to power their way through one of the most batshit crazy ideas in the history of television. I’ve watched it twenty times since Sunday (enormous h/t Deadspin for bringing this gift into my life) and it is like caramel coated crack. Whatever it is that you’re doing right now (like fighting to get custody of your kids back), drop it and watch the clip. You will not be sorry. Plus Michael Irvin’s diction is sort of Ultimate Warrior-esque in that segement.

Gronk Caught In Microphone Spike Shock Horror: The New England Patriots aren’t a particularly likable team. If you’re a Patriots fan and you’re not from the New England area, odds are you have some sort of angry gym teacher fetish that meshes Bill Belichick’s Droopy Dog Gone Rabid mystique. Still, seeing the Patriots in (Old) England was awesome. And that was entirely because Rob Gronkowski was there. I’m pretty sure in Gronk’s mind he was in a Slobs vs. Snobs ’80s comedy that only he could see. Dude spiked a microphone at the Trafalgar Square press conference, pretended to be a Buckingham Palace guard for a touchdown celebration and played a pizza like an electric guitar while having sex with Lady Sarah Chatto (I’m just guessing on the last one). Tom Brady was probably all like “how do you do?” to assorted Lords and Ladies in his time in England, while trying to make sure that Gronk doesn’t accidentally lose his Jughead crown in the punch bowl. The NFL games in London are always a disaster, but this year Gronk made things sort of interesting. We are in your debt, you goofy-ass meathead.

Danger! No Voltage!: Here in Toronto (Home of one of the 100 Best Towers in OntarioTM!), we were in the path of the “Superstorm”. It was kind of a pain, but it wasn’t like anything experienced on the U.S. East Coast. I mean, in my neighbourhood the most dangerous thing that happened during the storm was an unrelated homicide. Still, I had sort of a romantic idea of what would happen when the power would eventually go out. I’m a dumbfuck, so I imagined that when the power went out, I would spend my evenings making love and my days writing sonnets about the follies of the Industrial Age. Oh the whimsy! When the power did eventually go out, I immediately fell back on the ol’ power outage reliables: getting unreasonably angry, making elaborate deals with God that I wasn’t planning on keeping and trying to figure out a way not to get pistol whipped when trying to protect my candy bars from looters. “That’s MY storage container of Milky Ways! Don’t fuck with me, I’ve done that Gladwell 10 000 hours thing with Fatal Fury. I know I picked up some shit.” (/gets cracked in the mouth)

I always fantasize that if I were forced to be away from my usual conveniences, I would get super jacked, super smart and get around to making an optometrist appointment for the first time in like a decade.

There’s a part of me, a very dumb part of me, that imagines that if I were to ever go to prison (because of a jewel heist or because I was framed for regicide), I’d get a lot of shit done. I imagine that Dan The Prisoner would be super buff because he worked out all the time. My abs would the envy of the prison showers/stabyard. I also imagine that Dan The Prisoner would finally get around to reading a lot more books. I’d be a totally jacked literary genius that would triumphantly leave prison to start my life on the outside as some of NPR approved Adonis.

In reality, Dan The Prisoner would be murdered immediately. Probably by a sinus infection while checking in.

Week 9 Game To Watch With Your Eyeballs And/Or Listen To With Your Earpowers Steelers at Giants Drink in the magic that is the video for “We’re The N.Y. Giants”. The hook sounds a bit like “Rumors” by Timex Social Club, doesn’t it?

1. Half finished bag of wine.

2. Water-damaged box filled with back issues of Disney Adventures.

5. A dog dressed as a businessman.

7. Any semblance of hope in Kansas City.

Guests Saying Junk: Hatchie matchie! We lucked out and managed to get comedian/actress/podcasting dynamo/all around fantastic person Allison Dore as this week’s guest. Take it away, Allison.

As a casual football fan, for a long time I would decide which player I had the biggest crush on that year and just cheer for his team. Last season I decided it was time to get serious and dedicate myself to a team long term, but as a Canadian I don’t have the option of just rooting for the home team. I couldn’t choose based on a crush, because those fade, so who would be the lucky winner?

In January the 49ers beat the Saints when Vernon Davis dramatically caught the winning touchdown pass with 9 seconds left in the game, a catch that is now known as “The Catch III”. On NFL Sights and Sounds the cameras caught the emotion as Davis jogged back to the bench, tears pouring down his face, his teammates patting him on the back. Waiting at the sidelines with open arms was coach Jim Harbaugh, who held Davis and told him he was a great player.

I may not know the name of every player, or all of the rules, but football makes me emotional. I have never made it through a football movie without crying; including Necessary Roughness. Watching Davis, a tough guy, run crying into his coach’s arms…it’s almost too much for me. I have watched this scene over and over and I always tear up. That’s how I knew I am a Niners fan.

Yeah, that’s right: I chose my team based on a hug.

Dazzling stuff. Thanks Allison. Push us out the door with something seasonal, Jan Terri!

Hang out with Dan on Twitter or in the comments. Also be sure to come party with him at Plato’s Retreat!