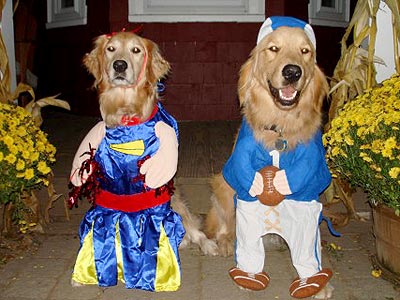 I do not know who these dogs are (maybe diplomats from Dogsylvania?), but they’re here and will also be with you after the jump. It’s Aw NFL Naw. Bark.

According to legend, folklore and internet enthusiasts, Vince Young scored a six on his Wonderlic Test. For those of you unfamiliar with the Wonderlic Test, it’s a (/checks Wikipedia for an easy definition that may be questionable in its accuracy) “twelve-minute, fifty-question test used to assess the aptitude of prospective employees for learning and problem-solving in a range of occupations”. I basically just know it as the intelligence test that the NFL uses to test the brain goo of potential draft picks. Fifty is a perfect score and six is a dismal score. Vince Young was mocked for years for getting a six (later reports had Young scoring a sixteen, which is better but still a low score) and while I never really took his test result that seriously, I can now sympathize with Young. I too have taken a Wonderlic Test and I failed it before I even answered the first question.

I had a job interview yesterday that required me to write the Wonderlic and show that I’m smartish enough to work in a dimly lit office in North York. Before I took the test, the administrative assistant asked me if I wanted a drink. I said yes and marched over to the water jug to myself a glass. I promptly spilled water all over the desk, my pants and the hole in the crotch of said pants. I was about to take an intelligence test and the first thing I did was be outsmarted by a jug. The HR lady saw me and there I was with pants soaked in water. I wouldn’t have been surprised if I immediately blurted: “the water done tricked me and that’s why my pants are crying!”

I also was told during my interview with the CEO (one of many interviews during this four hour Learnin’ Bout Dan extravaganza) that I would have to wear a shirt and tie to a follow up interview. I probably should have felt embarrassed, but I had this idea in the back of my mind that I was a dangerous rebel. Watch out corporate world, I don’t play by your rules. I’m going to come back wearing a shirt made of rock n’ roll and a tie made of punk electricity or whatever freaks the Establishment out. I am danger personified. Also, I don’t have $40 dollars for a shirt and tie. I need that money for vodka so I can cry-sing “Scenes From An Italian Restaurant” in the tub this weekend.

I don’t know my Wonderlic score, but I’m reasonably sure I scored higher than Vince Young. I may never truly know. I hope to have an essay writing night with the Philadelphia Eagles to get closure on this.

Pffft It Was A Practice Year: We’re now entering Week 12 where playoff dreams are destroyed like so many crackhouse windows during Rumspringa. There’s still hope for a lot of sputtering teams (like the Bills, the Bengals and the Alternate Universe St. Louis Cardinals), but now’s the period of time where each game gets a little more frustrating. These are the games that inspire vulgar miming from fans watching the game on TV. You have to hitch your star to whatever positives remain and prepare to get really excited about the draft when those positives turn to dust. Yup, them’s your options: believe the playoffs are possible or start getting weird about measuring the crotch inseam of a communications major from Louisiana Tech.

Job Recovery In Detroit: Seeing Kevin Smith return to the Lions after they initially declined to sign him post-ACL repair made this old curmudgeon’s heart smile. I have no intention to adopt Smith’s “hard work pays off” attitude, but it’s nice to see the Smith rack up yards and not be relegated to early retirement. I look forward to shouting angry curse words at him on Thursday when he takes fantasy points away from Matthew Stafford and throws salt all over my Fantasy GM hubris fries.

Fun Fact: I’m twenty-six years old and I find this commercial incredibly amusing. I am what’s wrong with this country.

I Am Listening To Sister Christian As I Type This: Last week, I couldn’t take my eyes off Jaguars coach Jack Del Rio. He was wearing a leather jacket on the sidelines which blew my mind into chunks of mind blowness. How long until we see a Hard Rock Cafe t-shirt underneath that jacket or a Taz spinning in a circle decal on Del Rio’s clipboard? I’d like to mock it, but I think it’s actually pretty neat. Jack Del Rio has this whole “tough Dad” presentation in the way he carries himself and I find it fascinating. I bet Del Rio makes his players watch him bench press while Blaine Gabbert holds a boombox that plays a mixtape of all Night Ranger’s greatest hits and underappreciated album tracks.

Is Media Television Still On TV? Either Way, Let’s Talk: I hope McDonald’s competes with Wendy’s “Where’s The Beef” revival by employing a strategy that forces all of their employees to dress as Mac Tonight.

Week 12 Game To Watch With Your Eyeballs And/Or Listen To With Your Earpowers: Niners at Ravens. Somewhere in the United States, a program director for a terrible sports radio station is composing a parody of Powerman 5000’s “When Worlds Collide” called “When Harbaughs Collide” for this week’s Harbaugh on Harbaugh coaching fiesta. He probably looks up noose tying techniques online and wonders if the support beams at 1280 KQZX (“The Fan Dump”) can handle his weight. Aside from that unpleasantness, this should be an exciting match-up of football magic and featuring two of the league’s toughest rush defenses. Also Ray Lewis will continue to yell at things whether he’s playing or not. For a guy that may or may not have killed a dude, Lewis sure likes spending a lot of time giving “scary eyes”.

Week 12 Game Not To Watch With Your Eyeballs And/Or Listen To With Your Earpowers: Panthers at Colts. Andy was a delight last week on Parks & Recreation. Everyone was, really. That’s why it’s imperative you watch every episode possible as many times as possible.

Unrelated Wrestling Talk That You May Have Seen On My Blog:

Sparkle Belt Contest with other ladies of various distinctiveness positioned around the wrestlesquare.

Gold Belt With Less Red On It Contest

Gold Belt With More Red On It Contest

Feel free to harass Dan on Twitter or in the comments. If Cuba Gooding Jr.’s agent is reading this, I have some career advice for him. Let’s Make Cuba Gooding Jr. Into Cuba Greating Jr.