Aw NFL Naw: A Ceramic Pig Will Tear Your Mind Out, He’ll Burn Your Soul (Week 3)

I’m not a big tennis fan, but I’m fascinated by the ads that run during major tennis tournaments. When Wimbledon or the US Open comes on, the ad breaks are made up of commercials for things aimed specifically at rich people. You get ads for things like designer suits, six figure salary based job search engines and premium imported monocle wax. The ads that air during football are the opposite of this. The NFL commercial slate is made up primarily of spots featuring light beer, cheap pizza and Denis Leary trying to tough-talk you into buying a truck. (Also, there are boner medicine commercials. These cover both rich people ads and poor people ads. Wang fatigue is a unifying concern.)

On the Canadian NFL feeds, Money Mart ads play a pretty consistent loop. This is upsetting because Money Mart has an absolutely fucking terrifying mascot. It’s a piggy bank with serial killer eyes and a coin slot where he probably keeps souls of schoolchildren and beloved family pets. Money Mart could have used John Wayne Gacy’s clown paintings as a mascot and it would have been less creepy. Advertisers take note, it takes finesse to create a “cute” character. Just outsource your commercials to Russell “The Cashman” Oliver and you’ll be fine. Oliver’s not a cute character, but he is tolerable and will occasionally paint himself silver to show you that he is a reasonable dealmaker.

Come football with me after the jump.

Michael Vick May Have A Concussion, Michael Vick May Play Anyway: There’s a good chance that Vick will probably play this weekend despite fears that he may have been concussed on Sunday. As someone that enjoys bloodsport (and the film Bloodsport), I am comfortable with this development. As someone that is vaguely aware that people getting brain damage is probably the worst non-neck injury possible in sports, I’m moderately concerned. I think football can reduce the number of head injuries by introducing rules allowing tacklers to punch and kick ballcarriers anywhere they want below the neck. Sure, this’ll probably lead to loads more broken bones and ruptured spleens, but it will also reduce the amount of players being debilitated by brain injuries.

Disclosure Note: This theory came to me while watching Vince Wilfork chug along with the football after a Phillip Rivers interception in the Patriots/Chargers game. I just wanted someone to punch Wilfork in his athletic gut so cot damn bad. (I may have also called Wilfork a “gashbag”. I have no idea what this means and hope to never know.)

“Potato Man”: Matt Ryan was called “a tough Irishman” by coach Mike Smith following the Falcons win over the Eagles. This could be due to Ryan’s resilience in the Sunday night game or because he got into a bareknuckle brawl in the parking lot over which was the best song in The Commitments. 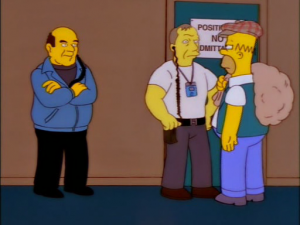 Bengals Are Tigers (Grrr! Roar! Swipe!): The chemistry between Andy Dalton and AJ Green is amazing. I hope they star in a romantic comedy together. If the romantic comedy is set in Cincinnati, it could easily be a post-apocalyptic romantic comedy.

Bills Are A Pluralization Of A Historical Figure (Guns! Showmanship! Wyoming!): Huzzah for Buffalo. Bills victories are hard to enjoy because there’s always a Neil LaBute-esque cruelty trap around the corner. (Flimsy Analogy Note: Wide Right is The Company Of Men, Brad Johnson is Nurse Betty, The Toronto Experiment is The Wicker Man remake.)

Week 3 Game To Watch With Your Eyeballs And/Or Listen To With Your Earpowers: Lions at Vikings. This is more of an endorsement to watch Matthew Stafford before he suffers twenty injuries at once later on this season.

Week 3 Game Not To Watch With Your Eyeballs And/Or Listen To With Your Earpowers: Steelers at Colts. Indianapolis looks dreadful right now. I don’t particularly care for the team, but I’m worried this could have a negative impact on Andy Dwyer.

(The new season of Parks & Recreation starts on Thursday. If you aren’t watching this show, everything your ancestors have ever done has been rendered moot. Civilization has existed exclusively to get us to a point where a show as awesome as Parks & Recreation could exist. No, I don’t think I’m overselling it.)

Dan MacRae is on Twitter. He is unsure where he ranks on Jason La Canfora’s excitement about upcoming games measurement system. Feel free to harass Dan in the comments or on social media. @danmacrae