Around The World In 31 Days Of Horror: New Zealand

Until recently, New Zealand hasn’t had much of a film industry even though the country’s first feature, Hinemoa, was made in 1914. Sadly most the country’s early cinema has been lost due to the unstable nitrate film base that was often used.

The first modern full-length feature, Sleeping Dogs, was released in 1977. Until then, the country was mostly known for documentaries and short films. A scattering of feature films were made throughout the 1980’s but then things started taking off. Filmmakers like Jane Campion (The Piano) and Peter Jackson boosted the NZ film scene in the ’90s and Jackson continues to shoot his movies in New Zealand. As a result of increased international productions, there are more local films getting made. 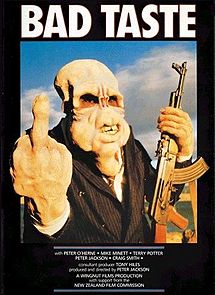 There were mostly thrillers getting made in ’80s but Jackson’s love of horror helped create some of the most outrageous, off-the-wall, gross-out horror comedies ever made. This genre continued with other filmmakers trying their hand at the comedy horror with films like Black Sheep and more recently Fresh Meat. Today’s film, though, is Jackson’s first feature: Bad Taste.

Released in 1987 but shot over four years on weekends with friends, Bad Taste is a rough, badly acted masterpiece of gross-out, over-the-top cult cinema. The film’s many innovative scenes established Jackson and helped him make the even weirder, more disgusting Meet the Feebles.

His masterpiece came in 1992 with Braindead, drop for drop probably the bloodiest film ever made, which I have already featured in a previous 31 Days of Horror.

Bad Taste is about a trio of investigators looking into the disappearance of everyone in a small New Zealand town. They discover that the place is overrun with aliens disguised as humans. They eventually attack the aliens home base and much gore, explosions and gunfights ensue.

The film is crude but entertaining, and Jackson’s innovative gore and action scenes free Bad Taste from its low-budget shackles.

And then Hollywood let him make The Lord of the Rings.