Around The World In 31 Days Of Horror: Italy

Italian cinema was ground-breaking in the early days of film. Italy’s first full-length feature film in 1911 was Dante’s Inferno which depicted scenes in Hell. In the late 1920’s, the Italian Futurism movement had a huge influenced on the upcoming German Expressionist movement.

There wasn’t much in the way of the horror genre until the late 1950’s. Once the ’60s hit the genre exploded in Italian cinemas. Filmmakers like Mario Bava started making such horror films as Black Sunday, A Bay of Blood, Castle of Blood and Kill, Baby, Kill. When the 1970’s hit filmmakers like Dario Argento, Lucio Fulci and Ruggero Deodato emerged and continued with the giallo genre that Bava had started in the ’60s. Giallo is a term that refers to Italian thrillers, usually with a main character accused of being a serial killer and it ends up spending the film searching for the killer. Many nasty and stylish deaths follow.

By the late ’70s and into the early ’80s filmmakers like Fulci and Deodato started making gory zombie / cannnibal horror films that shocked the world at the time. But instead of picking any of those films, today’s movie is a classic from Dario Argento that I’ve somehow missed in past years. 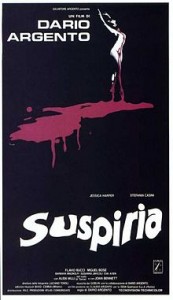 Suspiria (1977) is the first of Dario Argento’s Three Mothers trilogy, a loose trilogy about witches. The film stars Jessica Harper as an American ballet dancer who has just arrived in Germany at a prestigious school. Everything looks fine except there seems to be several mysterious deaths that have been occurring. A former student is killed off campus after she is expelled from the academy. Harper finds herself forced to stay on campus. She befriends her roommate and they then start snooping around the place unaware of what evil lurks within.

As with most of Argento’s movies the style takes precedence over the plot. The gruesome deaths are inventive and terrifying. The mystery itself has to do with witches and isn’t really ever explained well enough to fill in some plot holes. Still it’s a damn entertaining film and a classic film from Argento who is still making movies including his most recent, a 3D version of Dracula which has been declared by critics as the worst Dracula movie ever made.