Around The World In 31 Days Of Horror: Czech Republic / Slovakia

The Czech Republic and Slovakia have a long history of producing excellent pieces of cinema. From the days of the former Czechoslovakia where it produced such classic films as Closely Watched Trains, The Shop on Main Street, Kolya and The Fireman’s Ball to the present day where both countries have gone on to produce their own separate film industries.

The list of great filmmakers that have emerged from the Czech Republic and Slovakia are too many to list. On top of that, the film studio Barrandov Studios in Prague is one of the largest in Europe and has been the home to many Hollywood movies of late. Films like Mission: Impossible, Hellboy and Casino Royale have been shot there. With both countries being forced to act as one country for most of the twentieth century it gets hard to differentiate which films are Czech and which are Slovakian. Especially since everyone kind of worked together on films. 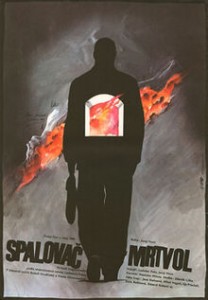 An example of this is is today’s horror movie The Cremator. Made in 1969 during the Czechoslovak New Wave movement this film was directed by Juraj Herz, a Slovakian born filmmaker. The movie is based on a Czech born writer Ladislav Fuks’ novel and shot in Czech. The movie itself is a dark look at Nazi Germany’s Final Solution through the mad eyes of a cremator.

Rudolf Hrusínský stars as Kopfrkingl, the cremator of the title. Set during WWII, Kopfrkingl meets a Austrian friend of his who slowly convinces him to embrace the Nazi way. Kopfrkingl is also obsessed with the Tibetan Book of the Dead and starts to believe that he is freeing people’s souls when he cremates them. The movie is a dark and disturbing look at the mind of someone who goes over the edge. It’s brilliantly filmed and is just creepy and terrifying. A masterpiece of film.