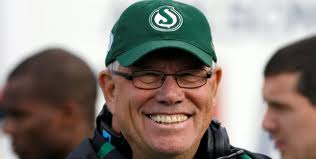 What a difference a month makes (plus a major coaching change, and a few roster tweaks).

Last month at this time (Aug. 18, to be exact, when the Riders lost 24-18 to the Argos in Toronto to fall to 1-7) the 2011 CFL season looked like a write-off for the Green & White. But the next day, upon returning to Regina, the Riders fired first year head coach Greg Marshall and offensive co-ordinator Doug Berry, and Ken Miller (pictured) returned to the sidelines.

When coaching changes are made in mid-season, it’s usually regarded as an act of desperation. Rarely does it result in a major turnaround for a team. But after humbling the Winnipeg Blue Bombers in their annual Labour Day home-and-home series, outscoring the Blue & Gold by a combined 72-30 score, the Riders appear to have turned their season around.

With a 3-7 record, they’re still in last place in the CFL West. But they are definitely back in the hunt. Certainly, the team has benefitted from the return of injured and missing veterans like running back Wes Cates and receivers Cary Koch and Andy Fantuz. Miller’s decision to let QB Darian Durant call most of his own plays also appears to have paid off. And after a slow start, rookie punter/place-kicker Chris Milo has performed well on special teams.

On defense, rookie safety Craig Butler, who laid a hellacious hit on Bomber QB Buck Pierce in last week’s game, and also recorded two interceptions, has been especially impressive. But the D-line and linebackers have been getting good pressure and plugging up the run. And all Rider defenders have been closing well on the ball and making opposition receivers and running backs pay for any yardage they happen to gain.

Later today the Riders have a rematch against the Argos at Mosaic Stadium. Since they last met, the Argos have dropped two games to the surging B.C. Lions. Following the first loss in Toronto, the team released starting QB Cleo Lemon, replacing him with Steven Jyles who’s had stints with Edmonton, Saskatchewan and Winnipeg. Coming off an injury, Jyles was largely ineffective against the Leos last week in Vancouver. With another week of practice under his belt, he should be sharper. But if the Riders play with the same intensity as they did against the Bombers, the likelihood of them losing is pretty remote.