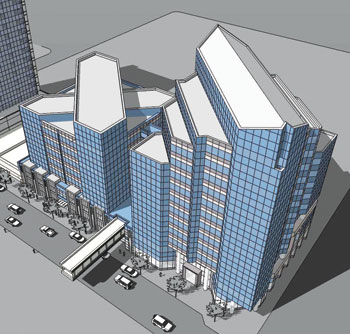 Earlier this summer, Harvard Developments announced plans to build a companion office building called Agriculture Place just south of the FCC Tower at the corner of Hamilton and 11th Ave. (that’s the preliminary design at left).

Today, our office got a Notice of Discretionary Use Application from the City of Regina offering a bit more information about the project. Under the provisions of the The Planning and Development Act 2007 I guess it’s a requirement that notice be provided to anyone within 75 m of a proposed redevelopment. Since we’re located on the Scarth St. Mall, we fit the bill.

What Harvard’s proposing to do is build a 10-story structure with about 14,910 sq. m of floor area. The ground floor would include space for commercial tenants, while the remaining nine floors would be for office space.

There will be two levels of underground parking, and the building will be connected to the FCC Tower at the ground floor and via a 7th floor pedway. I don’t know what that will mean for the existing walkway that runs from the Scarth St. Mall through to Hamilton St. just south of the existing tower. It may be kaput, but the drawing the city included with the notice appears to have a new pocket park that would be located between Agriculture Place and Hill Tower III.

Deadline to offer comments on the project is Dec. 14. In the summer news reports, it was indicated that construction would likely begin in the spring of 2013.