All The Rah Rah News You Can Use 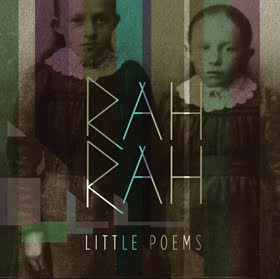 Regina’s Rah Rah dropped not one, not two, but three developments on fans today. If you’ve got a Rah Rah fan blog, you’ve been working hard all day. If you aren’t that person, then let me sum up the news of the day for you.

1 NEW RELEASES As they’ve said via press release and their blog, they’ve got a seven-inch called “Little Poems” coming out on June 12. That’ll be followed by their third LP, The Poet’s Dead, an album they recorded in 2011 with producers Gus Van Go and Werner F.

2 NEW LINEUP Jeff Romanyk has joined Rah Rah. You might remember him from his time with local act Sylvie, when he was an absolute beast on the drums.

I e-mailed Rah Rah’s vocalist and guitarist Marshall Burns to ask what Romanyk’s role in the band is going to be and how that would effect vocalist and drummer Erin Passmore’s duties. Burns says:

Erin will continue to play drums on the tunes that she has always played as well as the new songs that she plays drums on.

Jeff will play drums wherever Joel [Passmore, bassist] played drums in the past and on the new songs that he plays on the record as well as filling in keyboard and guitar parts on other “Erin drum” songs.

See what happens when your band switches instruments during a show? It starts to sound like an indie-rock logic puzzle. But that was a good and concise answer to my kinda nerdy questions. To boil it down more — Rah Rah has added another very talented person to the group.

3 NO MORE MYSPACE The band also says they will no longer be updating their MySpace page. Thank God. I’m glad they’re doing their part to end that scourge of my web browser once and for all.