Gun Culture: The Gift Of Stupidity That Keeps On Giving 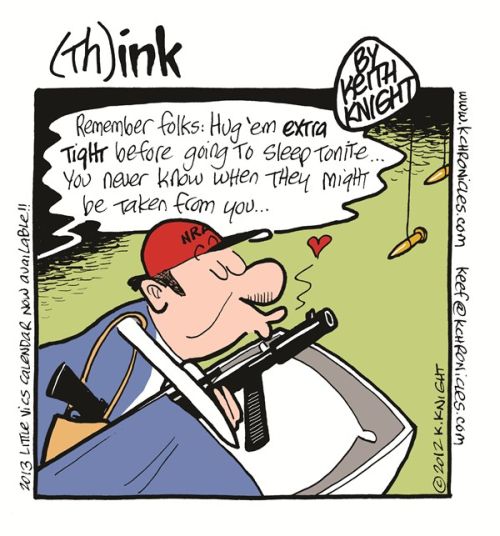 The National Rifle Association today held a press conference today at which it was determined that there would be no questions asked or answered, but the organization made it quite clear that they would be open to media questions next week, between Christmas and New Year’s. Then they trotted out Wayne LaPierre, who had bats flying out of both ears.

It’s a dangerous world out there full of crazy people, Wayne told us. It’s a dangerous world full of bloody video games, bad Oliver Stone movies, and a media that only cares about misinforming people about the guns that Wayne and the people who have paid his salary over the past 20 years want to sell to us to employ to protect our most precious children, to whom we don’t give the same level of protection that we give to Yankee Stadium or to the president of the United States. You see, Wayne is up there, not taking questions, because, really, the only people who truly care about the safety of all of our most precious children are the people like him, making sure that we have enough good guys with guns to protect us from the bad guys with guns

You just have to check out the whole thing here.
And what are we doing in this country?

There’s no economic, strategic, or moral sense in spending millions and billions of dollars and giving up hard-won civil rights and liberties to appease the boogeyman of foreign terrorism when governments can’t — or won’t — deal with domestic terrorism. And someone firing guns where people congregate — whether it’s a gangland style killing, someone going off his meds or someone wanting to launch a civil war because he doesn’t like the democratically-elected government of the day — is more of a terrorist than anyone quoting the Qoran.