Brad Wall On the Film Industry 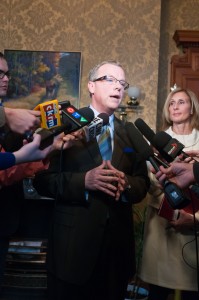 About 150 supporters of the film community showed up at the legislature today to show their disagreement with the government’s decision to end the Saskatchewan Film Employment Tax Credit (SFETC). Meanwhile, Saskatchewan Premier Brad Wall met with four prominent members of the film industry to talk about the cut.

After the meeting, which went about an hour longer than scheduled, Wall spoke with the press.

First off, Premier Wall clarified (as he did throughout the press conference) that the SFETC is actually a grant. “The tax credit comes as a grant,” he said. “As soon as production starts there’s a calculation on the production, on employment, and money is paid. That’s a grant.”

This is what Premier Wall described late this afternoon as a possible alternative to the SFETC:

“A tax credit, a nonrefundable tax credit will provide you a credit on taxes you paid in the province. In other words, you conduct your activities here, you make some money here, you’ve paid your taxes to the province.  Well, a tax credit takes that amount off the taxes you owe. It’s not a grant to perhaps a shell corporation you see set up for productions.”

Wall said he wants Saskatchewan companies to benefit, not productions from other jurisdictions coming to the province to set up “shell companies.”

“There are a number of these productions,” he said, “a number of existing tax credits that work like this – a production company will come from another jurisdiction. They’ll still employ Saskatchewan people to be eligible for the tax credit, but they’ll set up a temporary company, a shell company just to do that production. But when the production is over, the company’s ended. But they still receive the grant. That’s different than a tax credit which would actually provide an incentive for industry to remain here, and to put down longer-term roots, in the case of many in this province.”

In this view, film production is like manufacturing. You set up your widget factory and stay there as long as possible. But, as meeting attendee Norm Bolen pointed out, film is a transitory beast. It’s its own kind of industry. A production settles down in a region for eight months, employs a large number of local professionals- from cleaners to caterers to carpenters- spends bucket loads of cash and then returns to Toronto or LA. Yes, the company is based elsewhere, but, for many in the industry, that’s a moot point. What’s important is the resulting employment and that bucket load of cash it brings to the region (not to mention the fact that it’s a cultural product, hiring artists to be creative).

It’s estimated that the SFETC help generate $658 million worth of production in the province since its inception in 1998. The government spent $100 million. That’s cash that will dry up very soon.