31 Days Of Thrilling Horror: Fiend Without A Face 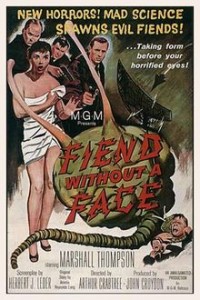 This low budget 1958 British horror should belong to the many cheesy 1950’s horrors that littered the drive-in but it doesn’t. It’s actually a pretty creepy movie that slowly builds to an awesome finale.

Set in rural Manitoba, Canada, apparently the Yanks were allowed to set up an American airbase. Near the base, there have been a string of deaths where all the victims have had their brains removed along with their spinal cords. The townsfolk blame the Americans. The Americans have been doing some nuclear tests and the Canadians think that the death’s have something to do with the radiation. The head of the American base, Marshall Thompson, thinks that it’s all the local creepy retired British scientist’s fault – and he’s right. The fiends are mental vampires who can’t get enough brains.

Director Arthur Crabtree and writer Herbert J. Leder knew that the movie was going to be low-budget so they crafted a story that suited the budget. One where the monsters are invisible until the final ten minutes of the film where they storm the heroes who have hold up in a deserted cabin in the middle of nowhere.

The trailer for the film doesn’t do the movie justice. With the film’s moody photography, creepy sound effects and cool stop-motion effects at the end – it’s a slow but suspenseful treat.