31 Days of Monstrous Horror: Them! 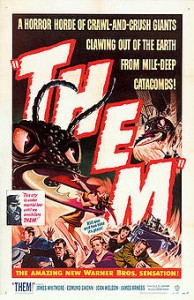 Monster movies are tricky films to make. They require a skill that sometimes walks between the fine line of horror and the ridiculous. And if they are not handled with caution the results could end up with less terror and more comedy.

Them! (1954) is a monster movie that manages to pull off the horror without becoming silly. It’s one of the first of the giant nuclear bug movies, Them! was made during the nuclear scare days of the 1950’s. The film starts off as a crime mystery and slowly becomes a science fiction horror. The film begins in a desert near Alamogordo, New Mexico where the state police discover a little girl wandering around mute and in a state of shock. The police trail the girl back to her home in a trailer and discover that it has been ripped open from the inside and her parents are missing and presumed dead. More deaths and destruction are discovered. Finally the FBI send James Arness to investigate.

Back at the remains of the trailer there is an animal track that can’t be identified and it brings a father/daughter team of entomologists named Doctors Harold (Edmund Gwenn) and Pat Medford (Joan Weldon). Edmund Gwenn has a theory but he makes several tests to be sure. His theory is quickly revealed to be correct. It’s a nest of giant radioactive mutant ants and they are trying to spread across the country.

The ants are giant puppets but they don’t look too bad, in fact the movie was nominated for Best Special Effects. The success of the film started everybody with five dollars and a movie camera trying to make a giant atomic monster movie. Films like The Giant Gila Monster (with a regular sized gila monster projected on a screen behind the cheesy actors) turned the genre into a joke.