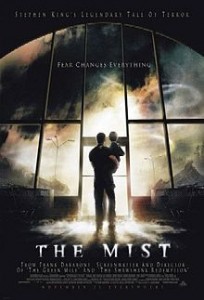 Stephen King novel’s have been made into a plethora of movies. Some excellent. Some so terrible that the less said about them the better. This is one of the excellent ones.

The Mist (2007) is based on one of King’s novellas. It was written for the screen and directed by Frank Darabont (The Green Mile, The Shawshank Redemption, The Walking Dead TV series) and it stars a large ensemble cast featuring Thomas Jane, Marcia Gay Harden and Laurie Holden.

The movie starts with the residents of a small community cleaning up after a vicious thunderstorm. In the distance, a mist is moving in. Thomas Jane takes his young son and goes to the local grocery store to pick up supplies. The place is packed because everybody is doing the same thing. The mist engulfs the store and a man with a bloody nose comes running into the store babbling about something in the mist and they need to close the doors. From there the film focuses on the people in the store and what they do about their situation.

Marcia Gay Harden is excellent as a crazy religious woman who believes that it’s the Apocalypse and that sacrifices need to be made. Not the work hard and persevere kind of sacrifice, the let’s sacrifice someone to our god kind of sacrifice. The townspeople quickly become divided by the situation and Darabont knows how to show just parts of nasty monsters that hide in the mist, building tension perfectly.

The best way to watch this movie though is to watch it in black and white. Darabont wanted it in black and white and he included that version along with the theatrical colour version on the DVD and Blu-ray sets. It adds an even creepier feeling and it hides the effects better. The ending to the movie is excellent. It’s the kind of ending that you will love or hate so much you end up hating the entire film because of it. For me, I love it and that’s all I’ll say about it.