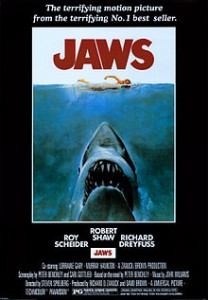 “This shark, swallow you whole. Little shakin’, little tenderizin’, an’ down you go.”

Jaws (1975) was directed by young upstart Steven Spielberg and starred Roy Scheider, Robert Shaw and Richard Dreyfuss. It was adapted from Peter Benchley’s novel of the same name.

Scheider stars as the chief of police on the fictional Amity Island. It seems that there is a shark problem. The movie opens with a young girl and drunk young man going for a little night swimming. The man passes out but the girl manages to go swimming, until something attacks and eats her.

The idea of a shark eating people panics the town and most of the townsfolk refuse to believe it exists, especially the arrogant mayor (Murray Hamilton) who refuses to close the beaches for fear of losing money. Naturally Scheider wantst the beaches closed and the shark killed. Richard Dreyfuss is a shark expert who helps Scheider and Robert Shaw is the badass fisherman who wants to kill the shark for money.

This is the film that made an entire generation of people scared to go into the water. It’s also the first film to become a summer blockbuster. It changed the way Hollywood marketed and opened movies in theatres. Before this film, the majority of movies had slow openings that were allowed to build and find their audience by press reviews and word of mouth. After Jaws it was all about opening in as many theatres as possible with a huge expensive advertising campaign. 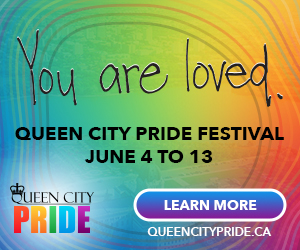