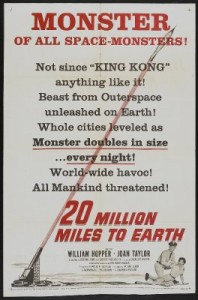 The first manned flight to Venus has ended in disaster with some of the seventeen member crew killed off when they reached the planet and more died when the ship crashes back on Earth. The only survivors are Col. Robert Calder (William Hopper), Dr. Sharman (Arthur Space) who quickly succumbs to his wounds and an egg that they brought back from Venus.

The egg hatches and a small reptile-like creature emerges. The creature quickly grows large because of all the oxygen Earth has and soon it’s rampaging through Rome and smashing up the Colosseum.

The film was developed to showcase the brilliant stop-motion animator Ray Harryhausen’s craft. It was shot in Rome because Harryhausen wanted to vacation there. Director Nathan Juran was making a lot of films in the 1950’s and this was easily one of his best. In 1957, he also made the silly The Deadly Mantis and the equally silly The Brain from Planet Arous. In 1958 he would re-team with Harryhausen and make the classic The 7th Voyage of Sinbad.

As far as evil Venusian aliens running amok, Roger Corman’s It Conquered the World (1956) which featured a silly rubber lobster-like Venusian monster is the kind of low budget crap that would usually get made. Harryhausen’s films were cheap but the man was a master of stop-motion monsters.