31 Days Of Hammer: The Gorgon

In a smaller German village in the early 1900’s, a young man is arrested for murder of his girlfriend after the two of them stumble upon something in the woods. The man commits suicide and the court quickly rules that he murdered the girl and then killed himself. The boy’s father Professor Jules Heitz (Michael Goodliffe) doesn’t believe the ruling and decides to discover the killer for himself.

His investigation uncovers seven murders where the victims all end up the same – turned to stone. Everyone in the town seems to working hard at covering up the evil that seems to be a foot. Heitz’s investigation leads him to Dr. Namaroff (Peter Cushing) who works at an asylum with his assistant the mysterious Carla Hoffman (Barbara Shelley) and “performed” the autopsy for the murdered girl and Heitz’s son. Namaroff gives Heitz the run around. Heitz moves into his late son’s cottage and is soon attacked by villagers who try to burn the place down. Heitz then contacts his other son Paul (Richard Pasco) and his colleague Professor Karl Meister (Christopher Lee) and asks for their help. Before Paul can arrive something kills Heitz turning him to stone. 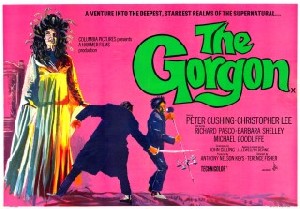 Paul arrives to find that his father has mysteriously died but left him a letter that his father wrote as he was dying. In the letter Heitz claims that a gorgon is on the loose and turning people to stone. Paul visits Namaroff but again gets the cold shoulder. Carla sees Paul and later visits him and memorizes the letter to recite back to Namaroff later on. Meanwhile the same sound that killed Heitz lures Paul but he looks into the water at the last second and is spared but at a cost. He awakens five days later and prematurely aged 10 years. Professor Meister shows up and decides to get to the bottom of things.

It’s weird to see a Hammer movie where Peter Cushing is essentially the bad guy while Christopher Lee is the good guy. For many many movies the roles were always reversed. The film itself is pretty good. The spirit of the gorgon haunting and attacking a small village is a nice change of pace from the usual vampires and man made monsters that usually inhabited Hammer’s movies. The only weakness in the film is when the gorgon finally makes it’s screen appearance. The effect could have been a lot better if maybe Ray Harryhausen had been employed to do the effects. Still another good effort from Hammer.