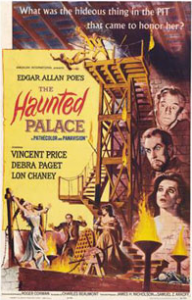 Roger Corman had a lot of success with his run of Edgar Allan Poe adaptations. Starting with the House of Usher in 1960, Corman made eight adaptations. After the first five, Corman decided to take a break and adapted a H.P. Lovecraft movie instead of a Poe story. The Case of Charles Dexter Ward became basis for the plot and the title was taken from Poe’s poem titled The Haunted Palace. To keep with Corman’s Poe series the film was marketed as Edgar Allan Poe’s The Haunted Palace and is considered part of the Poe series.

110 years later Charles Dexter Ward (Vincent Price), the last descendent of Joseph Curwen, has inherited Curwen’s estate in Arkham. Arriving in Arkham, Ward and his wife (Debra Paget) find that the townsfolk are all disfigured and they blame Curwen’s curse and don’t want Ward in the town. Ward notices the similarities between himself and his ancestor. Ward and his wife befriend a local doctor who tells them of the Necronomicon, an ancient book that Curwen had in his possession and used to summon the Elder Gods. Soon Ward starts changing, scaring his wife.

This was the first adaptation of H.P. Lovecraft to hit the big screen and Charles Beaumont (who wrote one of my favourite Twilight Zone episodes, The Howling Man) wrote the screenplay. Lon Chaney Jr. co-starred as Curwen’s servant who has managed to live the last 110 years without aging and helps Curwen possess Ward. The movie is one of my favourite Corman films and it’s held up quite well. Corman would go on to make two more Poe films before he stopped.